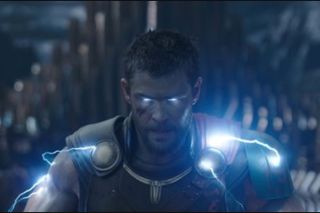 Full confession time: Newsarama didn't get to see Ragnarok until a press screening mid last week, days after the initial wave of reviews started to surface and it became readily apparent the film was another MCU critical hit. So as opposed to joining a chorus of positive reviews (and ours would have been glowing) we decided instead to dive into some of the finer details occupying our thoughts since last week – about the film, its characters, and the future of the Marvel cinematic universe in general.

So here we go, in no particular order:

The unprecedented, almost-unsullied mainstream success of the big screen MCU has a lot to do with the "voice" established in 2008's Iron Man – faithful and earnest, but with enough humor and irreverence so that the costumes and the superpowers don't become a distraction. Along the way, Marvel Studios has allowed directors to flirt with the edges – with Age of Ultron and Civil War striking a more serious tone, and Guardians of the Galaxy and its sequel of course pushing harder on the irreverent side.

Ragnarok pushes those latter boundaries further. Don't let some of the reviews fool you; it isn't straight-up comedy. It's still an action-adventure film with comedy, but it certainly goes to places in tone even Guardiansdidn't dare. And the choice seems to be paying off, as at the moment Ragnarok is up there as one of the MCU's best reviewed films.

While Tessa Thompson's Valkyrie (in a star-making role) is technically is based on a Marvel comic book character, most MCU character adaptations have been fairly faithful to the source material. This Valkyrie has little to do with the longtime-Defender C-list Marvel character, and the color of the skin and hair is the least of it.

Thompson's Valkyrie instantly debuts as one of the MC's use most appealing, dynamic, and badass heroes (not to mention one of its most powerful) and deserves a place among the among the core main Pantheon. Thompson is reportedly appearing in May's Infinity War, but given the size of that growing Pantheon, here's hoping Valkyrie isn't relegated to glorified cameo status.

Either way, it's an exciting development that the MCU has created what we think is fairly regarded as their first major (more) original hero.

Now of course we expect her to a debut in a Marvel comic any minute now.

Goldblum has always had something of a cult following due to his often quirky, halting line readings, with his Jurassic Park character Dr. Ian Malcolm perhaps being the most famous example. But his turn as the all-quirk Grandmaster may be the moment he transforms from an acquired taste into pop culture icon.

His frequent appearances on Saturday Night Live helped elevate a similarly quirky actor - Christopher Walken – into national treasure status, with "I got a fever, and the only prescription is more cowbell" the precise moment it happened. Grandmaster may be Goldblum's cowbell. He inhabits the movie like no other actor has ever had as much fun as he's having, and his sense of self-aware joy is infectious.

MCU fans will probably be clamoring for future appearances (James Gunn's may be champing at the bit to sign him up for Guardians 3) but this may also be a "less is more" situation.

After all, there was never more "more cowbell." And on that note, the cosmic MCU has to find room for Walken, right?

We'll keep this one short, and no, telling you something that doesn't happen isn't a spoiler…

But wtf is up with Sif?? We know Jamie Alexander is busy with the NBC tattooed lady series, but Marvel Studios has also recast part of Thor's supporting cast before. Given the circumstances of the movie (which we won't spoil) her absence in both presence or even thought or mention came off as awkward and somewhat inexplicable. Feige knows how to service his continuity-obsessed core fan base, and maybe he has a trick up his sleeve, after all we got Pepper back in Homecoming unexpectedly.

But if not (and even a little bit if so) that one goes down as a rare misstep.

They Got Hulk Right … Again.

We've been rather obsessive on this topic here on Newsarama – after two arguably unsuccessful solo films, the second too influenced by the better-remembered-than-good 1970's TV show, the third tour de force act of Marvel's The Avengers is when they finally got the Hulk right. Audiences wanted to see the Hulk, so Banner had to want to be the Hulk.

Age of Ultron more or less undid that, again making the Hulk a nightmarish burden for Banner - problematic because Mark Ruffalo's Banner is so easy to root for. And it was seemingly done to narratively service an Iron Man-Hulk battle royale.

But Ragnarok delivers a Thor-Hulk battle royale, and still delivers us the most fun Hulk yet. This is the Hulk fans want, and undoubtedly part of Ragnarok's secret sauce. Audiences want 'Hulk smash,' but having it attached to pathos is a product of another era. Audiences want guilt-free smash, and a comically semi-self-aware Green Goliath.

Yeah, we think he does, which given that first 'last' scene, makes a whole lot of sense.

And the pattern Thor talks about will likely continue.

You got have to see the movie to figure out what any of that means.

Change is Good … and It Looks Like There's More to Come

Again, without spoiling, there are no less than three, arguably four fairly significant developments/irrevocable changes to the Marvel-Thor mythology in Ragnarok (we'll give you hint, one of the images in the story is a little bit of a cheat), which as we're typing this of course makes perfect sense.

In comic books, almost all continuity eventually comes full circle. But if you read between the lines of Ragnarok, Marvel Studios seems to know that unlike their comic books counterparts, all its properties are living on borrowed time. This is particularly true of their Thor-verse, where the characters aren't supposed to age in any way we notice - an issue Hugh Jackman dealt with somewhat during his long term as Wolverine.

The MCU seems to be moving forward, and this is purely hypothetical, but in a way that seems to indicate Marvel Studios knows significant recasting won't be an answer in their future. In one particular case Marvel seems to have made a one-part dramatic/one-part pragmatic decision with a character.

We'll talk about this more in the coming months and days, particularly as more of our readers actually see Ragnarok, but the film didn't do anything to dissuade us from our working theory that a reboot of the MCU is in its future, perhaps even sooner than later.

Which, of course, would be a perfect time for a Marvel comic book universe reboot, but that's a whole other story for a whole other day.