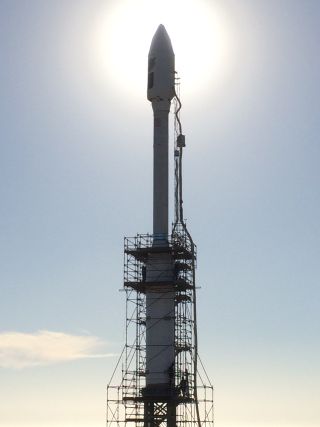 The private spaceflight company Orbital ATK will spend this Halloween launching a Minotaur into space.

Despite its name, this Minotaur is not a half-man, half-bull monster. This one is a brand-new, rebranded rocket that will deliver a suite of Earth-observation satellites into orbit today (Oct. 31).

You can watch the launch directly from Orbital ATK.

Six SkySat Earth-observation satellites and four Dove cubesats — all built by the private commercial imaging company Planet — will hitch a ride into orbit on the Minotaur-C.

"The Dove and SkySat satellites are some of the most capable spacecraft per kilogram ever, capturing medium- and high-resolution multispectral imagery of Earth at unprecedented scale and frequency," Orbital ATK officials said in a statement.

Planet acquired the SkySat constellation from Terra Bella, a Google subsidiary, earlier this year. Following this launch, 13 SkySats will be operating in space. Even more Dove spacecraft are in orbit.

"A record-breaking 271 Dove satellites have been successfully deployed and operated in space and today collect more imagery per day than any other commercial provider," Orbital ATK officials said.

"Halloween will be a historic day for 'green propulsion' and a cleaner space," a spokesperson for ECAPS told Space.com in an email. The SkySats' HPGP system helps to increase payload capacity and offers "a high-performance but nontoxic, lower-cost solution," Mathias Persson, business director for Bradford ECAPS, said in a statement.

The design for the new Minotaur-C rocket borrows existing technologies from Orbital ATK's Minotaur family of rockets. Minotaur-C still looks a lot like a Taurus rocket, but it is revamped with flight-proven avionics, software and other technologies used in the Minotaur rockets. The four-stage, solid-fueled launch vehicle can carry a payload of up to 3,500 lbs. (1,590 kg) into orbit.

"Minotaur-C employs four Orbital ATK solid rocket motors as its propulsion system, all of which have been flown dozens of times and are thoroughly flight-proven in various combinations on the company's other small space-launch vehicles, including Pegasus, Taurus and Minotaur, as well as on the Orbital Boost Vehicle (OBV) long-range missile defense interceptor," Orbital ATK officials said in a statement.

"It will also incorporate numerous design features that are common with the Minotaur product line, such as the rocket's electrical power system, payload fairing, flight-termination system, navigation sensors and RF components," the statement said.