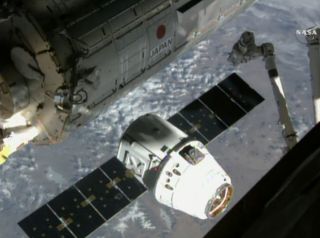 SpaceX’s uncrewed Dragon cargo ship approaches the International Space Station (ISS) on April 17, 2015, in this still from a camera on the orbiting lab’s exterior. This same Dragon will fly SpaceX’s next ISS resupply run for NASA.
(Image: © NASA TV)

The company's next cargo mission to the International Space Station (ISS), which is scheduled to launch no earlier than December, will employ a preflown Dragon capsule, NASA officials said.

The liftoff will also mark the return to service of Launch Complex 40 at Cape Canaveral Air Force Station in Florida. The pad has been out of commission since September 2016, when a SpaceX Falcon 9 rocket exploded there during a routine prelaunch test. [Watch: Dramatic Video of SpaceX's Rocket Explosion]

SpaceX has been making contracted ISS resupply runs for NASA using Dragon and the Falcon 9 for five years. The upcoming launch will kick off the 13th such mission for the company.

The Dragon that will launch on the flight has visited the station once before — on cargo mission number six, which lifted off in April 2015. (Dragon comes back to Earth for soft, parachute-aided ocean splashdowns. This return ability is unique; all other currently operational cargo craft burn up in the atmosphere when their space duties are done.)

SpaceX has flown a used Dragon once before. On June 3 of this year, a Falcon 9 launched a capsule whose first ISS mission came in September 2014.

Such activities are part of SpaceX's effort to develop fully and rapidly reusable spaceflight systems, which company founder and CEO Elon Musk has said could revolutionize space exploration by slashing its cost.

Indeed, the Falcon 9's first stage is reusable, and the company has successfully landed these boosters 18 times during orbital missions. Three of these preflown rocket stages have taken to the skies again, most recently on Oct. 11. (SpaceX will attempt to land the Falcon 9 first stage during the December Dragon flight as well.)

Dragon will carry a number of interesting payloads on the upcoming mission, including a NASA instrument designed to measure how much energy the sun delivers to Earth and a machine that will produce ZBLAN optical fiber on orbit. This latter effort is led by Made In Space, a California-based company that built the two 3D printers currently aboard the orbiting lab.