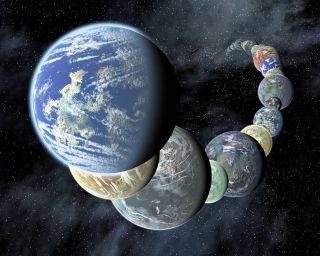 A distant sun-like star may have devoured a dozen or more of its own Earth-size planets, new research shows.

Researchers named the star Kronos, after the Titan of Greek mythology who ate his own children out of fears they'd dethrone him, according to a statement from Princeton University. Kronos belongs to a binary star system, or double-star system, located 350 light-years from Earth.

Astronomers discovered the star's ravenous habits while comparing its chemical composition to that of its stellar twin, named Krios — the Greek Titan god of the constellations and Kronos' older brother. The results showed that Kronos had an unusually high level of rock-forming minerals, suggesting it feasted on roughly 15 Earth masses' worth of rocky planets in its lifetime, according to the study. [Gallery: Dying Stars Consume Rocky Alien Planets]

Both stars — designated as HD 240430 and HD 240429, respectively — are approximately 4 billion years old, and they appear to be yellow G-type stars, similar to (but slightly younger than) the sun. Observations also showed that the stars orbit each other once every 10,000 years or so, according to the study.

At first, astronomers questioned whether the two stars were in fact a binary pair, because they are located a whopping two light-years apart. But further research confirmed that the co-moving stars have the same radial velocities. Their movements toward and away from Earth match — a key indicator of a binary star system, according to the statement.

What is most surprising about the stellar duo is that they are composed of drastically different materials. The study revealed that Kronos had an unusually high level of minerals such as magnesium, aluminum, silicon, iron, chromium and yttrium — metals that make up the bulk of rocky planets such as Earth. However, the ravenous star did not have an equally high level of volatile compounds, which are most often found in gas form, like oxygen, carbon, nitrogen and potassium, according to the statement.

Most metal-rich stars "have all the other elements enhanced at a similar level, whereas Kronos has volatile elements suppressed, which makes it really weird in the general context of stellar abundance patterns," Semyeong Oh, a graduate student at Princeton and lead author of the study, said in the statement.

The abundance of rock-forming minerals was concentrated in Kronos' outer layers, rather than mixed throughout the star. Furthermore, the researchers confirmed that the types of minerals in the outer layers of the star solidify at warmer temperatures — a characteristic of rocky planets, which form closer to their parent star than gas giants do.

Therefore, Kronos likely consumed 15 Earth-mass planets in order to gain the unusual abundance of rock-forming minerals, the researchers said; otherwise, the star would have a higher abundance of volatiles from gobbling up gas giants.

"All of the elements that would make up a rocky planet are exactly the elements that are enhanced on Kronos," Oh said. "And the volatile elements are not enhanced, so that provides a strong argument for a planet engulfment scenario, instead of something else."

"At the moment, we are still at the stage of piecing together different observations to determine how and when exoplanets form," said Jessie Christiansen, an astronomer at the NASA Exoplanet Science Institute at the California Institute of Technology who was not involved in the research.

"It's difficult to directly observe planet formation around young stars — they are typically shrouded in dust, and the stars themselves are very active, which makes it hard to disentangle any signals from the planets," Christiansen said. "So we have to infer what we can from the limited information we have. If borne out, this new window onto the masses and compositions of the material in the early stages of planetary systems may provide crucial constraints for planet formation theories."