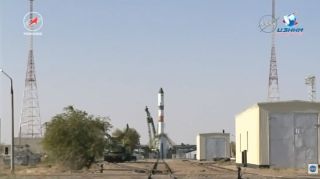 The Soyuz rocket carrying the uncrewed Progress 68 cargo ship is seen just one minute before Russia's Roscosmos space agency aborted a launch attempt from Baikonur Cosmodrome in Kazakhstan on Oct. 12, 2017. One of two umbilical towers (left) had already retracted as planned.
(Image: © NASA)

The Russian space agency Roscosmos aborted the launch of its fastest cargo mission to the International Space Station yet today (Oct. 12) due to "reasons yet to be analyzed," a NASA spokesperson said.

A Russian-built Soyuz rocket was scheduled to launch the uncrewed Progress 68 cargo ship to the space station at 5:32 a.m. EDT (0932 GMT) from Site 31 at Baikonur Cosmodrome in Kazakhstan, but Roscosmos called off the flight in the countdown's final minute. Progress 68 is packed with nearly 3 tons of food, fuel and supplies for the space station. The next launch attempt could occur no earlier than Saturday (Oct. 14) if the reason for today's abort can be solved by then, NASA officials said.

"For reasons yet to be analyzed by the Russian Federal Space Agency, the launch of the Progress 68 cargo craft planned for this morning at 4:32 a.m. Central Time was scrubbed in the last minute," NASA spokesperson Rob Navias said from Mission Control at NASA's Johnson Space Center in Houston. "The engine ignition never occurred on the Soyuz booster." [The Space Station's Robotic Cargo Ship Fleet in Pictures]

Progress 68 was scheduled to launch on a 3.5-hour flight to the space station to test a new rendezvous technique to fly supplies (and eventually crews) to the orbiting laboratory faster. Progress cargo vehicles and Russia's Soyuz crew capsules initially took two days to reach the space station and orbited the Earth 34 times. In 2013, Russia began flying 6-hour missions that orbited Earth just four times before arriving at the station. Progress 68 was scheduled to orbit Earth only two times before arriving at the station.

But with today's launch abort, a rarity for Russia's typically dependable workhorse Soyuz rocket and Progress vehicle, the launch will occur no earlier than Saturday and take two days to reach the International Space Station due to the orbital mechanics involved, Navias said. [How Russia's Progress Cargo Ships Work (Infographic)]

Assuming the cause of today's launch abort is identified and fixed, a Saturday launch for Progress 68 would be scheduled for 4:46 a.m. EDT (0846 GMT), Navias said.

In the meantime, Russian engineers will continue to study what went wrong with today's launch attempt.

"No reason for the launch delay has yet been given," Navias said shortly after the launch was scrubbed.

The countdown for today's launch using a Soyuz 2.1a rocket went smoothly straight up to that last minute, he added.

"The Soyuz 2.1a booster on Site 31 at the Baikonur Cosmodrome in Kazakhstan was fully fueled for launch and the countdown proceeded with no issues throughout the course of the early morning hours," Navias said. "The countdown reached the final minute."

At that time, the first of two umbilical towers retracted as planned from the Soyuz rocket, but the second of the two towers did not, Navias said. The second tower retraction is a typical indicator of the start of a Soyuz booster's launch sequence, he added.

The Russian space agency's uncrewed Progress spacecraft are similar in appearance to the agency's crewed Soyuz spacecraft, but carry propellant for the space station in place of the crew capsule on the Soyuz. Progress vehicles are designed to fly themselves to the station and dock autonomously, but can be remotely controlled by cosmonauts on the station if needed.

Space.com will update this story as more information on the cause of today's launch abort is available.