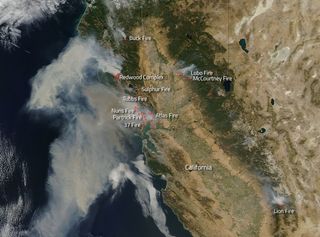 The wildfires that are devastating parts of northern California are on full display in a photo snapped by NASA's Aqua satellite.

"Actively burning areas (hot spots), detected by MODIS's thermal bands, are outlined in red," NASA officials wrote in a statement. "Each hot spot is an area where the thermal detectors on the MODIS instrument recognized temperatures higher than background. When accompanied by plumes of smoke, as in this image, such hot spots are diagnostic for fire."

The fires blazed up over the weekend, and they have spread quickly throughout Sonoma, Napa and Mendocino counties — the core of California's wine country — due to strong winds and hot, dry conditions.

The fires have killed at least 13 people, wounded more than 100 and destroyed up to 1,500 buildings, according to The Washington Post. Authorities are still investigating what caused the conflagrations.

For the latest information about each individual fire, go to the California Department of Forestry and Fire Protection page here: http://www.fire.ca.gov/current_incidents.

MODIS is one of six instruments aboard the Aqua satellite, which launched in May 2002. As its name suggests, Aqua primarily studies Earth's water cycle. However, the satellite gathers a variety of climate and weather data from its perch about 435 miles (700 kilometers) above the planet.