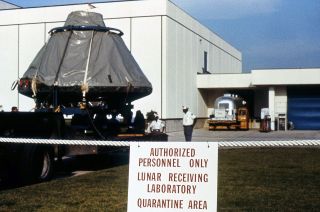 HOUSTON — The last time that it was in Houston, the spacecraft that flew the first humans to walk on the moon was purposely kept away from the public. On its first return to the city in 48 years, the Apollo 11 command module will be available for all to see.

Columbia, the NASA capsule that carried Neil Armstrong, Buzz Aldrin and Michael Collins to the moon and back in 1969, is the centerpiece of the Smithsonian's "Destination Moon: The Apollo 11 Mission" traveling exhibit. The vehicle and 20 other artifacts from the first lunar landing will debut on Saturday (Oct. 14) at Space Center Houston, the visitor center for NASA's Johnson Space Center in Texas.

"Our guests will be the first to trace the steps of the first voyage to [land humans on] the moon in this spectacular new exhibit," said William Harris, the president and CEO of Space Center Houston. [Apollo 11: The Historic Moon Landing in Pictures]

The non-profit science and space learning center will host Columbia through March 18, 2018, when the "Destination Moon" exhibit will move to the Saint Louis Science Center in Missouri. Over the next two years, the command module will also travel to Pittsburgh and Seattle before returning to the National Air and Space Museum in Washington, D.C., where it was on exhibit for the past 40 years.

The tour celebrates the 50th anniversary of the Apollo 11 mission and provides an opportunity for the Smithsonian to display Columbia as the National Air and Space Museum prepares a new gallery for its ongoing exhibition.

The opening of "Destination Moon: The Apollo 11 Mission" also marks the return of Columbia to "Space City" since it spent 15 days in Houston in 1969.

Layover from the moon

Prior to the Apollo 11 mission launching on July 16, 1969, Columbia had no reason to be in Houston. Though the city was home to the astronauts and was their point of contact back on Earth (hence, "Houston, Tranquility Base here, the Eagle has landed") the spacecraft was built in California and was shipped directly to Florida, from where it departed for the moon. [Watch: NASA Archive Video of Apollo 11 Moonwalk]

Post-flight, Columbia was due to go back to its assembly facility southeast of Los Angeles to be analyzed, but first it had to make a layover in Houston due to a concern over "moon germs." Together with the crew and the moon rocks they brought back, NASA quarantined the capsule for 21 days from the point of splashdown, to ensure — however unlikely the chance — that no contagions were returned from the lunar surface.

Recovered from the Pacific Ocean by the U.S.S. Hornet aircraft carrier, and after stops at Ford Island and Hickam Air Force Base in Hawaii (for deactivation of its on board pyrotechnics), Columbia was flown on a C-133 aircraft to Houston, where it arrived at 6:17 p.m. Central (2317 GMT) on July 30, 1969.

NASA built a dedicated facility to quarantine and study the moon rocks, examine the crew and continue safing the Apollo command module at its Manned Spacecraft Center in Houston (today, Johnson Space Center). The command module arrived after the crew and rocks and was brought into the Lunar Receiving Laboratory (LRL) through its own garage door-style entrance.

Most of the 83,000-square-foot (7,711-square-meter) LRL was devoted to the crew's reception area, sample labs and an administrative area. Only one small bay was dedicated to supporting the command module. [NASA's 17 Apollo Moon Missions in Photos]

"The command module was moved into the bay on the trailer we used after recovering the spacecraft," recalled John Hirasaki, the sole engineer to be quarantined with the crew and Columbia, in an interview with collectSPACE.com. "We set it on a trailer so we could move it around."

Hirasaki said that the bay was configured to allow limited work on the spacecraft, including work stands, lighting and tools needed to access its interior. The room was also kept at negative pressure with respect to the exterior ambient atmosphere, like many areas of the building, to ensure that any escaping lunar material would be contained.

"There was a ledge that you went down to descend to the floor, but we had work stands arranged so we could walk up and access the command module itself," he said.

Hirasaki began working on Columbia while it was still at sea on board the Hornet, on its way back to shore. Once it arrived at the LRL, he removed the flight data recorder and decontaminated the spacecraft's atmosphere.

Hirasaki was the only person to work on Columbia while it was at the LRL. He could not recall if Armstrong or Aldrin came by to see their spacecraft, but Collins — who was command module pilot — did stop by, climbed inside and inscribed on a wall, "The best ship to come down the line."

Columbia left Houston on board a Super Guppy aircraft at Ellington Air Force Base (Ellington Airport) for delivery to North American Rockwell's facilities in Downey, California, on Aug. 14, 1969, the same day the Apollo 11 crew were celebrated with a massive ticker tape parade in New York City.

The closest Columbia came to returning to Houston (until now) was in March 1971, when it visited Austin, Texas for three days as part of a 50-state tour that culminated with its donation at the Smithsonian.

The LRL went on to host two other spacecraft, Apollo 12's Yankee Clipper and Apollo 14's Kitty Hawk, before it was decided that the returning command modules and crew no longer required quarantine. The LRL, originally housed in Building 37 at the Johnson Space Center, continued to be used to store and study lunar samples until 1979, when a more capable facility was opened nearby (in Building 31N).

Building 37 was repurposed for NASA's Life Sciences Lab and the command module bay was for some time used as a research laboratory. Ultimately though, it became a lunch room for the building's occupants, with tables, chairs and a refrigerator.

Today, the bay — and the entire building — stand empty. The life sciences division was moved to a new facility and Building 37 is slated for demolition, possibly as soon as by the end of the year, while Columbia's display at the nearby Space Center Houston continues.

Follow coverage of the debut of "Destination Moon: The Apollo 11 Mission" touring exhibit at collectSPACE.