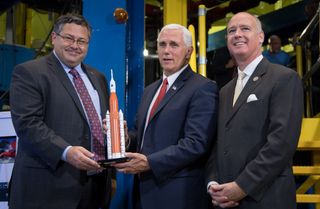 The meeting, titled "Leading the Next Frontier: An Event with the National Space Council," will be held at the Smithsonian National Air and Space Museum's Steven F. Udvar-Hazy Center in Chantilly, Virginia (where the space shuttle Discovery is on display) and will include testimony by space industry experts from civilian, commercial and national security fields.

"At President Trump's direction, the kick-off meeting of the National Space Council will bring together all aspects and sectors of the national space enterprise for the first time in a quarter century," Pence said in a statement. "This meeting will provide an opportunity for the Administration to lay out its vision for space exploration. As President Trump said, ‘We’re a nation of pioneers, and the next great American frontier is space.'" [From Ike to Trump: Presidential Visions for Space Exploration]

Trump resurrected the National Space Council with an executive order on June 30 in order to steer the future of American space policy. The council was last active in the early 1990s, during the administration of President George H.W. Bush. Pence chairs the reinstated council, with aerospace industry veteran Scott Pace serving as executive secretary.

In addition to Pence and Pace, the National Space Council's members consist of:

Earlier this month, the Trump administration nominated Rep. Jim Bridenstine (R-Okla.) to serve as NASA Administrator. He must be confirmed by the Senate before taking charge of the U.S. space agency.