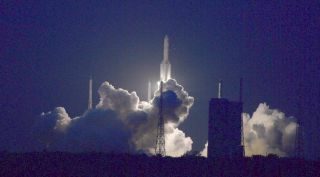 A Long March 5 rocket lifts off from the Wenchang Satellite Launch Center July 2. The launch was later declared a failure.
(Image: © Xinhua)

ADELAIDE, Australia — A leading official of China's space program confirmed Sept. 25 that the July failure of the country's largest launch vehicle will lead to delays to upcoming lunar missions, including one to return samples.

Tian Yulong, secretary general of the China National Space Administration, said at a press conference during the 68th International Astronautical Congress here that the investigation into the July 2 failure of the Long March 5 on its second mission was ongoing, with no updates on the cause of the failure.

"The Long March 5 is a bigger challenge for China's space agency," he said. "In the future, maybe the end of the year, we will have a clear understanding of the problem."

Observers who followed the launch, broadcast live by Chinese television, noted a plume of gas late in the first stage burn, which suggested the failure was linked to an issue with the stage's engines or other elements of its propulsion system. Chinese officials waited until 45 minutes after the launch to announce the launch had failed and its payload, the Shijian-18 communications satellite, failed to reach orbit.

Long March 5 is the largest rocket developed by China to date, with a performance similar to the Delta 4 Heavy by United Launch Alliance. The rocket's first launch, in November 2016, was considered a success despite some issues with the upper stage that reduced the accuracy of the desired orbit.

The next Long March 5 mission was scheduled for this November, carrying Chang'e-5, China's first lunar sample return mission. That spacecraft will land on the moon, gather samples and return them to Earth in the first such mission to the moon in more than four decades. With the Long March rocket grounded while the investigation continues, Tian confirmed that mission would be delayed.

"We plan to adjust the schedule" for that mission, he said, along with Chang'e-4, a lunar lander that will be the first spacecraft to land on the far side of the moon. That mission was scheduled to launch in late 2018, about a year after Chang'e-5.

"By the end of the year we will have some detailed information" about the revised schedule for those missions, Tian said.

Long March 5 delays are also expected to push back the launch of Tianhe, the core module of China's first space station. That launch was expected some time in 2018 but will likely be delayed to 2019.

Tian said at the press conference that the station, when completed in the early 2020s, would be open to international cooperation with a wide range of countries. "In the future, China's space station will be open to all sides," he said.