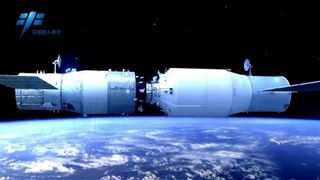 China's first resupply craft, Tianzhou-1, has been deorbited under orders from ground controllers.

Over the past five months, Tianzhou-1 and Tiangong-2 accomplished a trio of refueling sequences: One on April 27, a second on June 15 and a final one on Sept. 16, Xinhua reported.

Tiangong-2 was unoccupied during these activities.

Chinese space officials view the refueling and docking activities as a prelude to the country's building of a larger space station in the mid- 2020s.