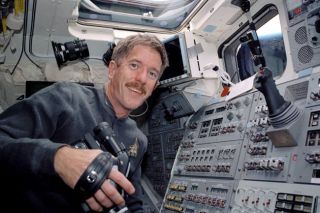 A pair of veteranNASA spacewalkers is set to return to the International Space Station (ISS)this week aboard the shuttle Atlantis to help boost the orbital laboratory'spower supply.

Astronauts JimReilly II and Patrick Forrester are gearing up for a plannedJune 8 launch into orbit alongside their five STS-117 crewmates todeliver two massive starboard trusses and solar arrays to ISS. The two spaceflyersare the experienced half of a four-astronaut team that will pair off in twos toinstall the new station segments over the course of three planned spacewalks.

"We're reallylooking forward to it," Reilly told reporters in a preflight briefing, addingthat the Atlantis crew is taking the best methods of NASA's last two shuttleflights - many tasks of which are being repeated during STS-117 -- to ensuresuccess. "It's all been done before. You just have to do it, but do itbetter."

Reilly, Forresterand their STS-117 crewmates plan to launch Friday for a planned11-day construction flight to the ISS. The astronauts are hauling the17.5-ton Starboard 3/Starboard 4 (S3/S4)truss segments and new solar wings to the orbital laboratory and hope tofurl away an older solar array in what will mark NASA's first of up to fourshuttle flights this year.

Hailing from Mesquite, Texas, Reilly is aveteran of two shuttle flights and three spacewalks since he first joinedNASA's astronaut corps in 1994. He will serve as NASA's chief spacewalkerduring the STS-117 mission.

"For me,personally, it started when I was eight years old, John Glenn was flying on hisfirst flight and of all places I was sitting in a dentist chair?," Reilly,53, said of his astronaut path in a NASA interview, adding that his dentist wasa spaceflight fan. "I was just laying there with all this stuff in mymouth, [and] he asked me if I ever thought I'd like to be an astronaut. Ithought, 'Anything but here.'"

Reilly holds aPh.D. in geosciences from the University of Texas-Dallas, and served as an oiland gas exploration geologist before signing on as a NASA astronaut.

He made his firstspaceflight aboard the shuttle Endeavour in 1998 for NASA's STS-89 mission to Russia's Mir space stationto deliver new cargo and a U.S.astronaut to the orbital laboratory. In 2001, he helped installthe U.S. Quest airlock at the ISS over the course of three spacewalksduring the 12-day STS-104 shuttle flight aboard Atlantis. Altogether, he hasspent more than 21days flying in space.

"Seeing thismassive piece of equipment in space and looking at it and saying, we have donthis in just a matter of a couple of years?it was a real 'gee whiz' moment forme at that point," Reilly said, adding that he believes the science the stationwill ultimate yield will have a huge impact for those on Earth. "So in amuch bigger sense, it's really an investment in our future and our kids'future."

During STS-117,Reilly will participate in the first and third planned spacewalks for the11-day mission to install new trusses and solararrays. He will also help orchestrate the second spacewalk from inside theAtlantis orbiter's flight deck.

But from apersonal standpoint, he told reporters that he hopes to snap the ultimatetravel photo to catch the Earth below his feet while performing a spacewalk.

"That's oneof the most remarkable views there is," Reilly said. "To kind ofrealize you're a human satellite."

Like Reilly,Forrester is making his own return to the space and the ISS during the STS-117,though his path did not always point towards orbit.

"I grew up ina military family," Forrester, 50, said in a NASA interview, adding thathis father Redmond ? a retired U.S. Army colonel ? was a career officer."I knew that was what I wanted to do, too."

But after readingabout Gen. Bob Stewart, the U.S. Army's first astronaut, Forrester opted to pursuespaceflight on his own.

"I startedthinking, wow, you know, you can do this thing that I love, which is being anArmy officer -- think that's a really important role -- and but also anastronaut," said Forrester, who is also a retired Army colonel. "OnceI latched onto that, I never really let it go."

Forrester holds abachelors of sciencedegree in from the U.S. Military Academy in West Point. While he initially hoped to aninfantry lieutenant, Forrester's astronaut goals carried him back to graduateschool, where he obtained amasters of science in mechanical and aerospace engineering from the University of Virginia.

After serving asan assault helicopter officer, he went on to serve as a flight test engineerand test pilot in subsequent positions and underwent training with the Armyparachutist course, U.S. Army Ranger School and other military schools tobecome a Master Army Aviator with more than 4,000 hours of flight time in 50different aircraft. He and his wife Diana have two children.

Forresterfirst joined NASA's ranks as an aerospace engineer in 1993 and was selected tobecome a mission specialist astronaut in May 1996. He first launched to space aboard the space shuttle Discoveryin 2001 on NASA's STS-105 mission to ferry a new crew and fresh supplies to theISS. During that 12-dayspaceflight, Forrester performed two spacewalks and served alongside fellowastronaut Rick Sturckow, who is commanding the upcoming STS-117mission.

"It was justa pleasure to be assigned to fly with him again," Forrester said of Sturckowin a preflight briefing. "That really helped me, starting off, to knowexactly what wouldbe expected in this training flow."

Forrester willteam up with fellow STS-117 spacewalker Steve Swanson during their mission'ssecond planned spacewalk to install the S3/S4 truss segments and solar arrays.He will also serve as the mission's primaryrobotic arm wrangler andwill wield Atlantis' 50-foot (15-meter) appendage to help conduct heat shieldinspections and pluck the $367.3million S3/S4 truss out of the orbiter's cargo bay and hand it off to thestation's own arm.

Installing the newsolar arrays will be vital to the space station's ability to support newinternational laboratories, Forrester said, adding that the impact of humanspaceflight ? and the ISS in particular ? will likely be one felt strongest inthe future, when its place as a feat of engineering and cooperation areclearer. He also hopes that his second spaceflight will allow him to savor thevivid colors and views of the growing station.

"It's abeautiful thing," Forrester said if the ISS. "It's funny to say thatof something made of metal."