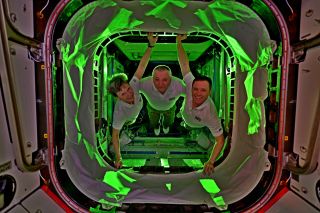 NASA astronaut Peggy Whitson will wrap up her record-breaking mission to the International Space Station today (Sept. 2) as she and her Expedition 52 crewmates return to Earth in a Soyuz spacecraft. You can watch their departure, descent and landing in a live webcast here on Space.com.

Traveling with Whitson will be NASA astronaut Jack Fischer and Russian cosmonaut Fyodor Yurchikhin, who arrived at the space station together in April and will have spent 136 days in space during this mission. Whitson will have spent 288 consecutive days in space after completing an extended mission. During her stay, she set a new record for the most cumulative time in space by an American, with 665 days spent in orbit.

The journey home will begin at 2:40 p.m. EDT (1840 GMT), after the three crewmembers say goodbye to their Expedition 52/53 crewmates, climb inside the Russian Soyuz craft and close the hatch. At 9:22 p.m. EDT (0122 GMT on Sept. 3), the Soyuz will touch down in Kazakhstan. You can watch their entire journey home in a live webcast here on Space.com. Live coverage of the landing will begin at 8 p.m. EDT (0000 GMT). [Space Station Photos: Expedition 52 Crew in Orbit]

After the crewmembers touch down on land, helicopter crews will meet them on the ground and help them out of their spacecraft. As with previous landings, the crew is expected to fly to the Karaganda airport in Kazakhstan for a traditional welcoming ceremony

Usually after this ceremony, NASA astronauts return to Johnson Space Center in Houston for postflight medical tests and physical rehabilitation. However, flooding from Hurricane Harvey has shut down much of Houston, and NASA has closed Johnson Space Center until Tuesday (Sept. 5).

The agency has yet to announce a contingency plan for the astronauts' arrival. "As a result of the impacts of Hurricane Harvey, NASA is reviewing return plans to Houston of Whitson, Fischer and the science samples landing in the Soyuz spacecraft," NASA officials said in a statement. In an email to Space.com Thursday evening (Aug. 31), NASA Press Secretary Stephanie Schierholz said, "That is the best info we have at the moment, as plans are still in work."

Regardless of where the astronauts hang out for now, Whitson and Fischer will stay busy for the first 45 days after the landing, as their job is not over yet.

"The first 45 days after we land from a long-duration spaceflight, we're doing rehabilitation, trying to get our bodies used to being on Earth again," Whitson said during an in-flight interview with Space.com. "There are many investigations on the human body that we've been doing up here in orbit, so we'll have to continue those studies as well during that first 45 days."