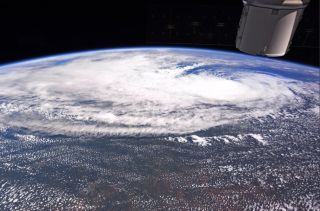 NASA shuttered JSC to everyone except "essential personnel" on Aug. 25, the day that Harvey slammed into the Texas coast as a Category 4 hurricane. Though Harvey has since been downgraded to a tropical storm, it has lingered, continuing to drench southeastern Texas and southern Louisiana with record-breaking rain that has caused catastrophic flooding. [Hurricane Harvey: Photos of the Massive Storm from Space]

"Our primary concern is the safety of our employees and all our fellow Houstonians," JSC Director and former NASA astronaut Ellen Ochoa said in a statement. "We're taking these measures to ensure the members of our team and their families can take care of themselves and their neighbors."

The essential personnel riding out the storm at JSC include the team responsible for NASA's International Space Station (ISS) operations. These workers will continue supporting and monitoring ISS activities, including the landing of three ISS crewmembers Saturday (Sept. 2) in Kazakhstan, NASA officials said.

Those three crewmembers are NASA astronauts Peggy Whitson and Jack Fischer and cosmonaut Fyodor Yurchikhin.NASA has also canceled a press conference with Whitson, scheduled for today (Aug. 30), since the Johnson Space Center would be unable to support the event due to Harvey's effects. In a Twitter post, Ochoa also said that NASA had canceled survival training for its latest astronaut class, which reported for duty last week.

NASA's $8.8 billion James Webb Space Telescope, which is scheduled to launch in late 2018, is currently at JSC for testing. Mission team members have said that flooding has infiltrated the building housing Webb, but the telescope is fine.

All of the backup systems required to keep Webb in good condition "were checked prior to the arrival of the storm and are ready for use if necessary," NASA officials wrote in the same statement.

As of Tuesday morning (Aug. 29), Harvey had dumped 42 inches (107 centimeters) of rain on JSC, according to the center's emergency communications Twitter account.