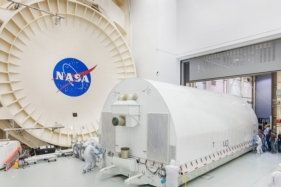 Housed in a protective canister, the James Webb Space Telescope is pushed into the clean room of Building 32 at NASA's Johnson Space Center in Houston. In the background is the vault-like door to Chamber A, a giant thermal vacuum chamber in which the Webb was later sealed for testing.
(Image: © Chris Gunn/NASA)

After unleashing days of torrential rains and devastating floods that swamped Houston and much of southeastern Texas, the former Hurricane Harvey is now threatening NASA’s Johnson Space Center (JSC)—and with it some of the space agency's most valuable assets, such as the $8.6 billion James Webb Space Telescope.

As the home of the nation's astronaut corps and the control center for the International Space Station, JSC is the heart of NASA's human spaceflight program. It is also the site of NASA's largest thermal vacuum chamber, known as "Chamber A," which resides in the center's "Building 32" and since July has harbored the Webb telescope for a 100-day test simulating deep-space conditions. Set to launch as soon as October of next year, Webb is by far the biggest, boldest and most expensive space observatory every built. Some call it NASA's next-generation successor to the Hubble Space Telescope. It boasts cryogenically-cooled instruments and a 6.5-meter segmented primary mirror that promise to deliver revolutionary observations of the universe's first galaxies, and of exoplanets around nearby stars—if, that is, it can emerge unscathed from rains and flooding that the National Weather Service has called "unfathomable" and "catastrophic."

As of this writing, there have been no reports of flooding at Building 32 or other critical JSC facilities, and the center possesses several electric generators as backup in the event of a power outage. JSC lies 13 feet above sea level at its lowest point, and 22 feet at its highest—making it a relatively lofty point in the surrounding landscape, much of which is already submerged beneath rising floodwaters.

"We are on an island apparently," JSC flight director Royce Renfrew wrote in a series of tweets Sunday morning. "No way out of my area. Abandoned cars all over on the roads." Later that day, another JSC flight director, Zebulon Scoville, tweeted that he and other critical employees were "camping out" at their work stations, "standing strong and keeping the lights on." That evening, officials announced that JSC would be closed Monday to all but "Mission Essential Personnel," who are required to stay on-site for critical tasks like maintaining contact with the space station.

But the deluge from Harvey is not yet over. The center could remain closed for days to come as Harvey's moisture-filled clouds continue dumping rain over the region. As of Monday afternoon, that closure was to continue into at least Tuesday according to a post on JSC's emergency communications Twitter account, which also noted that the center had so far received 31 inches of precipitation and that local roads were "flooding quickly" in the ongoing downpour. Harvey churned back out to sea Monday morning, picking up moisture from the ocean as it traveled southeast; forecasts now indicate the storm will slowly churn to the northeast, potentially bringing another 15 to 25 inches of rain to southeastern Texas and southwestern Louisiana.

Reached for comment, a NASA spokesperson said that "our personnel and hardware are safe and everyone is taking appropriate precautions." Via e-mail, John Mather, Webb's senior project scientist, reiterated that Webb "is safe and so far all the staff are, too. We are very well prepared with people ready to camp in place as needed." Reporting from JSC on Twitter, the European Space Agency astronomer Sarah Kendrew gave a more detailed appraisal of the situation, noting that workers were using "mops and buckets" to sop up rainwater near workstations in Building 32, but that none of the leaks were near Chamber A. "The telescope," she wrote, "is totally fine."