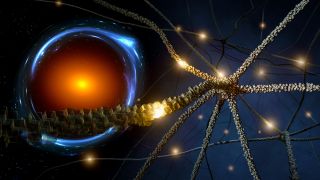 For the first time, researchers have used neural networks to analyze gravitational lenses, characterizing the distortions in space-time 10 million times faster than traditional methods can do so.
(Image: © Greg Stewart/SLAC National Accelerator Laboratory)

Researchers have used brain-like "neural networks" to analyze key distortions in space-time 10 million times faster than conventional methods can do so.

The new study trained an artificial-intelligence system to examine features called gravitational lenses in images from the Hubble Space Telescope as well as simulated images. The process could give researchers a better glimpse of how mass is distributed in the galaxy, and provide close-ups of distant galactic objects.

"Analyses that typically take weeks to months to complete, that require the input of experts and that are computationally demanding, can be done by neural nets within a fraction of a second, in a fully automated way and, in principle, on a cell phone's computer chip," Laurence Perreault Levasseur, a co-author of the new study, said in a statement. Perreault Levasseur is a researcher at the Kavli Institute for Particle Astrophysics and Cosmology (KIPAC), which is a joint institute of the U.S. Department of Energy's SLAC National Accelerator Laboratory and Stanford University in California. [Gravitational Lensing Eloquently Described in 'Hubblecast' (Video)]

Chance alignments of dense objects and background galaxies can create gravitational lenses — a natural magnification of the background as its light bends around the foreground's mass. The distorted ring of light that results, sometimes called an Einstein ring, can be analyzed to learn about both the distant system itself and the mass of the object passing in front of it. This is particularly handy for understanding dark matter, which, although it cannot be observed directly, can act as the "lens" to focus background galaxies.

Scientists are discovering more and more of these lenses in data from telescope surveys, SLAC researchers said in the statement. However, analyzing the systems to learn about the objects' properties has been a long, tedious process of comparing the lens images with simulations and trying to re-create the conditions that caused them.

Rather than weeks or months of analysis for a single lens, neural networks can find the lens's properties in just a few seconds, the researchers said.

Neural networks work by exposing an artificial-intelligence system with a particular brain-inspired architecture to millions or billions of examples of given properties, thus helping researchers learn how to identify those properties in other situations. For instance, showing a neural network increasingly more photos of dogs would allow it to identify dogs more and more accurately, without requiring the researchers to tell the network which details to pay attention to.

This process can also be used for more complex tasks. For example, Google's AlphaGo program was shown a large number of Go games to analyze and process, and it ultimately defeated a world champion of the complex game. Traditional computer programs have faltered at mastering Go because of the extreme number of possible moves.

In this study, the researchers showed neural-network systems about a half-million simulated gravitational-lens images over the course of a day. Then, they tested the networks on new lenses, and found extremely quick and accurate analyses.

"The neural networks we tested — three publicly available neural nets and one that we developed ourselves — were able to determine the properties of each lens, including how its mass was distributed and how much it magnified the image of the background galaxy," the study's lead author, Yashar Hezaveh, also a researcher at KIPAC, said in the statement.

While neural networks have been applied to astrophysics before, they've rarely been used at this level of complexity, the researchers said. For instance, they've been used to identify whether an image contains a gravitational lens, but not to analyze it.

"It's as if [the study's neural networks] not only picked photos of dogs from a pile of photos, but also returned information about the dogs' weight, height and age," Hezaveh said.

Although the analysis was done with a high-performance computing cluster, the researchers said it could be done with much less processing power — on a laptop or even a cellphone, for instance. And as more and more astronomical data demands examination, such a process could become a crucial tool for learning as much as possible from the deluge.

"Neural nets have been applied to astrophysical problems in the past, with mixed outcomes," KIPAC researcher Roger Blandford, who was not an author of the paper, said in the statement. "But new algorithms combined with modern graphics processing units, or GPUs, can produce extremely fast and reliable results, as the gravitational lens problem tackled in this paper dramatically demonstrates. There is considerable optimism that this will become the approach of choice for many more data processing and analysis problems in astrophysics and other fields."

The new work was detailed Aug. 30 in the journal Nature.