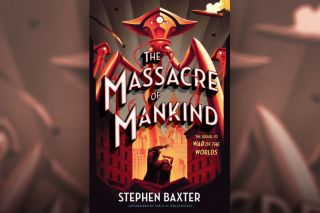 "The Massacre of Mankind" by Stephen Baxter is the authorized sequel to "War of the Worlds" by the H.G. Wells Estate. The new book was released on Aug. 22, 2017.
(Image: © Crown/Penguin Random House)

With his sequels to H.G. Wells' famed science-fiction novels, author Stephen Baxter creates what many fans desperately want after reading or watching a fantastic story: An answer to what happens next.

In an interview with Space.com, Baxter revealed that his long admiration for the stories of H.G. Wells has lead him to develop the character of Julie Elphinstone, who must combat the new Martian threat in "The Massacre of Mankind," released in August. Baxter strives to make Wells' themes relevant for today's world and writes to pay homage to a pioneering figure of the science-fiction literary genre. [Best Space Books and Sci-Fi: A Space.com Reading List]

Space.com: How did you come to develop the sequel for a beloved book by such a renowned science-fiction writer?

Stephen Baxter: I first did a sequel to "The Time Machine" [1895, William Heinemann], called "The Time Ships" [1995, HarperCollins], that was published for the centennial of that particular book.

[My involvement] then goes back to my reading of Wells as a kid. I think my first exposure to Wells was the 1953 movie "War of the Worlds" on Saturday afternoon TV. At the age of 12 or 13, I was super into science fiction, and I read Wells' great works.

"The Time Machine" in particular ends on a huge cliff-hanger, and I thought there must be a sequel by Wells to that: What happens to the time traveler? What happens to history after his return? That got lodged in my mind, and 30 years later, I was looking at the centennial coming up, and thought, that's a good time to do a project like that. And it was very successful!

It was very pleasing to do, and I always wanted to do more, particularly for "War of the Worlds," because again, it ends on an open question: The Martians have to come back; they came because of a climate collapse on Mars, so they must try again, and what happens then? That was the basic impulse.

Space.com: Why did you choose to write the "War of the Worlds" sequel now?

Baxter: Well, really, it's because there're more anniversaries for Wells. Last year was Wells' 150th birthday. As time passes, I've gotten to know the Wellsians, as they call themselves: The Wells scholars and the vice president of the H.G. Wells Society, which is a committee of international scholars and fans. We have a meeting once a year or so.

There was a big event in Woking [Surrey, UK] last year, which is where "War of the Worlds" was written. To celebrate the birthday and the new statue of H.G. Wells, a lot of his family came along. All these great-grandchildren, all these great-great-grandchildren, came from all over the world, about fifty of them, and I got to address them. Which was wonderful, how proud they should be of their granddad. [How Time Travel Works in Science Fiction (Infographic)]

Space.com: And speaking of Wellsians, that brings me to my next question: When you wrote the book, how did you balance your own artistic license with what those Wellsians would want in the story?

Baxter: There [were] no formal requests or framework put in place by Wells' family or by anyone, except that they wanted it to be a homage, and [for me] to take Wells' work seriously.

Aside from that, well, yes, I wanted to take the work as seriously as possible and do it well, but in the end, frankly — and with every book — my real guideline is my own reaction as a reader. What would I like to see in a sequel? That was [part of] my first brainstorm. If I picked it off the shelf, what would I like to see on the cover? What kind of themes would I expect to see?

[I decided] the basic image was going to be the Martians over Manhattan, stalking through the skyscrapers in the 1920s, in F. Scott Fitzgerald's Manhattan. You know, art-deco Martians.

Space.com: Yes! I was looking for the right word to describe the cover. It is art-deco Martian.

Baxter: That was what I aimed for and everything followed from that. … I also wanted to use the techniques that Wells uses. For instance, the narration.

In the original book, Wells has a narrator who went to the war, but he's writing it a few years later. It's a historical memoir. And that's what I wanted to do with the sequel. There's a character who is actually in Wells' original, who flees London in the initial attack. So again, she witnesses the second war, but she's writing a few years later, like a journalist or a historian. So [I included] things like that, to certainly make it feel like Wells as much as possible. [The Future Envisioned at Museum of Science Fiction]

Space.com: What was the most challenging thing about writing the main character, Julie Elphinstone?

Baxter: Well, that's a good question. The most challenging thing … I think it was really trying to work out how things would change for women after the Martian War. And what kind of war she would have [experienced]. She was very young in the original.

During the First World War, things changed dramatically for women in Britain. So many men went off to fight that women were manning factories and driving buses, which women had never done before. Soon after the war, women got the vote in Britain. So things dramatically changed for women. And this would especially be true after the Martian War. Britain develops a huge land army [in the book] to defend the country against a future Martian attack. And again, there would be vacancies for women. So I did quite a lot of research on women's lives during the war and how they changed — quite dramatic, actually. It's one of these rather untold stories, but it's socially significant. So I wanted her to be a kind of emblem of that, you know. But she's also single-minded. She doesn't like the militarism of post-war British society, [how, for example,] the generals become politicians. They used the Martian threat as an excuse to militarize society to react against that.

Space.com: How did you incorporate science about Mars in your novel, and what was that research process like — did you speak to anyone in particular to make sure that those elements were accurate?

Baxter: This is where the Wells society and all the academics are so good! There are papers where people have analyzed the orbits and analyzed things like the Martian attack on London in the original. The tactics they used turned out to be the tactics that the German army used in Paris in the [Franco-Prussian] war of 1870. So I didn't speak to anybody, but I had this whole massive literature and critical research to look at. What I did do was take Wells' vision of Mars seriously. He got the orbits right, and that's still our understanding. It was interesting to research not the science of Mars [now], but as it was understood in 1897. [NASA's Curiosity Rover Spots Wispy Clouds in Martian Skies]

Space.com: Has writing this sequel to "War of the Worlds" inspired you to start thinking about another project for the future?

Baxter: Well, I have to say, yes! [Laughs] "The First Men in the Moon" (1901, George Newnes) will be my next logical book [sequel], because most of my work is about space travel and so forth. Going back to Wells' ["The First Men in the Moon"] would be really interesting. Wells' work always had a lot of meanings below the surface: With "War of the Worlds," it's colonialism and evolution, that sort of thing. In "The First Men in the Moon," [Wells] comments on the industrialization of society. Wells was around at the time of the first assembly lines, where people were being used as machines as opposed to craftsmen, and Wells would clearly see the modern world, with Uber and deliveries. The gig economy, as we call it. That would be an interesting thing to get into, [to] use Wells' moons as kind of a modern commentary on the way we're turning out now. So it's specialized, biologically adapted workers as opposed to automation, but the same kind of ethical challenges.

This interview has been edited for length. You can buy "The Massacre of Mankind" on Amazon.com.