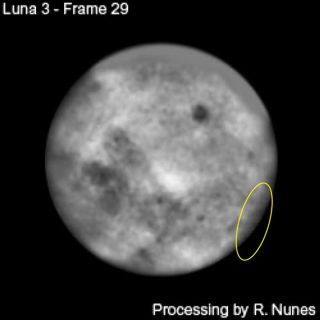 Reprocessed Luna 3 frame 29 taken on Oct. 7, 1959. The dark smudge of the South Pole-Aitken basinâ€™s western edge is circled. The familiar Earth-facing maria are seen in the western half of the disc. Image courtesy NSSDC and Ricardo Nunes

Newly reprocessed images of the Moon's far side taken by Soviet spacecraft more than 40 years ago may have confirmed that the Moon's biggest impact scar was glimpsed far earlier than previously thought.

The images were acquired by the Luna 3 and Zond 3 spacecraft in October 1959 and July 1965 respectively and provided the first look at the Moon's forever hidden far side.

The original murky and noisy images have now been re-processed by amateur astronomer Ricardo Nunes and add weight to a proposal by V.V. Shevchenko and V.I.Chikmachev of the Sternberg State Astronomical Institute in Moscow that a dark smudge visible on the Moon's limb in Luna 3 images is part of the western edge of the enormous South Pole-Aitken Basin (SPAB).

The SPAB is a gargantuan impact basin-1,550 miles (2,500 kilometers) diameter-that sprawls between the lunar South Pole and the crater Aitken. The basin is 8 miles (12 kilometers) deep.

Despite its size, over subsequent years only slivers of the basin were seen in images and it took until 1992 for the SPAB to be seen in its entirety; courtesy of the Galileo spacecraft while en-route to Jupiter.

Further image processing work by Nunes on images captured by Zond 3 reveal the eastern portion of the SPAB's mountainous outer rings. Those now-eroded peaks were thrust up 4.1 billion years ago, and the yawning basin they encircle is an important tool for looking deep into lunar history.

"The formation of SPAB was a huge event in early lunar history, and its influence was likely felt all across the Moon," said Lisa Gaddis of the Astrogeology Program at the U.S. Geological Survey. "Not only is SPAB the biggest 'hole' in our solar system, but it must have dug down deeply enough to expose and excavate materials from deep within the Moon."

The Moon's mantle is the region buried more than 62 miles (100 kilometers) below the impact-pummelled outer crust, and only the most powerful impacts can liberate the well concealed mantle material. It is still hotly debated how much mantle material resides within the basin, although high levels of the iron and thorium-thought to be abundant in the mantle-are present.

The Apollo missions returned 842 pounds (382 kilograms) of Moon rock, but none of it was from the mantle.

Scientists would love to study this well-guarded material "It would tell us a lot about what exists at depth within the Moon," Gaddis says. "It would also help us to understand how a large impact event behaves, when the event occurred, how much material might have been thrown out, how much melted and the composition of the mantle or lower crust."

The SPAB may also harbor some far-flung samples, as Gaddis explains: "Although it's generally believed that most material currently seen within SPAB is derived locally, there may be small amounts of 'foreign' materials in SPAB from other, younger impacts on the Moon. So it's possible that we'd find compositions that have not yet been sampled on the Moon. We'd also learn something about the early history of the Earth/Moon system and how it formed."

Theorists say the Moon was carved from Earth in a spectacular collision by a Mars-sized object.

Researchers now understand the importance of the SPAB, but had the basin been seen fully in those first far side images, lunar exploration may have steered a different course.

"It would likely have changed lunar maps and our understanding of the occurrence and distribution of large impacts on terrestrial planets. It also might have influenced exploration or at least imaging of the far side at an earlier time," Gaddis said.

The next time we lay eyes on the SPAB may well be courtesy of NASA's Lunar Reconnaissance Orbiter (LRO) to be launched in 2008. LRO is bristling with instrumentation and will provide our best look at the SPAB, nearly 50 years after it was stumbled upon by Luna 3.