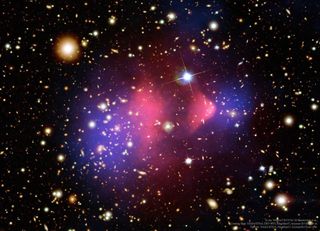 Paul Sutter is an astrophysicist at The Ohio State University and the chief scientist at COSI Science Center. Sutter is also host of Ask a Spaceman, We Don’t Planet and COSI Science Now.

Dark matter is more than a name — it's a part of our universe. But it's totally unfamiliar to our everyday experience. Based on the evidence, scientists think it's invisible in the truest sense of the word: It simply doesn't interact with light. Gravity, however, is universal, and so dark matter can still have an influence on the shape and motions of galaxies. But we'll never see it. At least, not directly.

As much as we would prefer to live in a simpler universe, dark matter is not the product of some astronomer's fever dream after a late-night observing session. It's only after decades of careful observations that cosmologists have come to the inescapable conclusion that most of the matter in our universe is simply invisible. [Dark Matter and Dark Energy: The Mystery Explained (Infographic)]

The initial hints of dark matter came in the 1930s as astronomer Fritz Zwicky made the first X-ray observations of the Coma Cluster, a dense knot of a thousand galaxies over 300 million light-years away. The galaxies themselves aren't very bright in X-ray light, but the galaxies in a cluster swim in a hot, thin soup of plasma (a gas with some unique properties), which does emit high-energy radiation. In his initial measurements, Zwicky noticed an inconsistency: The plasma was much too hot.

Stable systems like galaxy clusters are a study in balance. In this case, the tendency of a hot gas to expand is balanced by the inward pull of its own gravity. If clusters are to survive for billions of years — which they must, in order for us to actually observe them all over the universe — then these two forces must be in equilibrium. But when Zwicky added up the masses of all the galaxies and the plasma itself, it was far too small; the inward gravitational pull of all that matter wasn't enough to overcome the natural expansion of the gas. In other words, the cluster should've — well, I don't want to say exploded, but you get the idea, long ago.

He named the missing mass "dunkle materie" ("dark matter" in German) and went on to figure out other problems.

The concept of dark matter was largely ignored until the 1970s, when astronomer Vera Rubin made her groundbreaking measurements of the rotation speeds of stars within galaxies. Here, again, was a mystery: The stars appear to be orbiting far too fast. The galaxies should've flung themselves apart like a broken-down carnival ride long ago. Instead, there they were, stable as could be.

At this point, a dilemma emerged. Maybe there's some invisible matter floating around inside galaxies and clusters, keeping them gravitationally glued together. But maybe our understanding of how gravity works is just wrong; perhaps Newton's work can explain the way planets move in our solar system but not larger systems.

Newtonian dynamics (which attempts to explain the mysteries mentioned above by adjusting the details of Newton's work), were on equal scientific footing. We simply couldn't tell them apart.

That is, until more evidence came in. The first strong hints of a dark universe came from observations of the cosmic microwave background, the ancient afterglow light pattern from the hot and sweaty early years of the universe. That light is uniform to 1 part in 10,000, but buried in that all-surrounding glow are tiny variations, bumps and wiggles that give us a map of the universe at that age.

Those bumps and wiggles are also a study in balance, as multiple competing forces vied for dominance in the hot, dense plasma of the young cosmos. The outward pressure of radiation was resisted by the inward pull of matter's gravity, and that struggle was captured in a snapshot when the CMB was formed. By observing the patterns in the CMB, we can play a straightforward guess-the-recipe game: put various ingredients (normal matter, dark matter, radiation, modified gravity, etc.) into a pot, see what comes out, and compare directly to observations.

And try as we could, we just couldn't make those modified Newtonian dynamics and altered forces of gravity work. But an invisible component to the universe, one that didn't interact with radiation all? It seemed to fit the bill.

Still, as is usual in science, there was room for debate. Perhaps not all the observations could be explained by the presence of dark matter, scientists thought. Maybe general relativity — still the most advanced theory we have on the nature of gravity — was not the be-all-end-all gravitational theory.

Those hopes were largely dashed in the most violent way possible — with a bullet. The Bullet Cluster, that is. Two massive galaxy clusters, each weighing in at hundreds of quadrillions of solar masses, slammed into each other long ago. One of the most energetic events in all of nature, the collision turned the clusters inside out, giving us a clue to their contents.

Different observations reveal different components of the Bullet Cluster. Visible light pinpoints the locations of the member galaxies, and they did about what you would expect after the collision: nothing much. The galaxies are so small compared to the volume of the cluster, they simply flew past each other like a swarm of bees.

X-rays expose the fate of the hot plasma between the galaxies. The gas got all tangled up at the midpoint of the collision, with all the complicated bow shocks, cold fronts and turbulence one would expect. This was space weather played out on the grandest of scales.

Also helpful was gravitational lensing, which allows scientists to map the location of matter (whether it interacts directly with radiation or not) based on the way its gravity bends the path of background light. The lensing maps for the Bullet Cluster show an intriguing pattern: most of the stuff in the Bullet Cluster is not tangled up in the center with the hot plasma, and it's not exactly associated with the galaxies, either.

The Bullet Cluster, and a myriad of observations of similar objects, tie together our picture of dark matter along with other lines of evidence like stellar velocities in galaxies, the cosmic microwave background, and more. Nature is trying to tell us something, and we're doing our best to listen: The inescapable conclusion from multiple independent lines of evidence is that most of the matter in our universe is a new kind of particle; one that doesn't interact with light or even itself. It's dark matter.

We still haven't pinned down the exact character of the dark matter particle, but we are closing in on its properties. Sooner or later, nature will reveal to us even its darkest secrets.

Learn more by listening to the episode "What's the matter with dark matter?" on the Ask A Spaceman podcast, available on iTunes and on the Web at http://www.askaspaceman.com. Thanks to @kdawelch, Andreas C., Oscar Z., Peter W., William G., Olivia P., Matthew A, and @TheM4YOR. for the questions that led to this piece! Ask your own question on Twitter using #AskASpaceman or by following Paul @PaulMattSutter and facebook.com/PaulMattSutter.