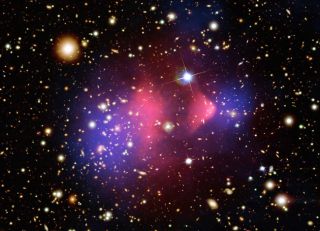 Hot gas detected by Chandra in X-rays is seen as two pink clumps that contain most of the normal matter in the two clusters. The bullet-shaped clump on the right is hot gas from one cluster, which passed through the hot gas from the other larger cluster. Other telescopes were used to detect the bulk of the matter in the clusters, which turns out to be dark matter (highlighted in blue).
(Image: © X-ray: NASA/CXC/CfA/M.Markevitch et al.; Optical: NASA/STScI; Magellan/U.Arizona/D.Clowe et al.; Lensing Map: NASA/STScI; ESO WFI; Magellan/U.Arizona/D.Clowe et al.)

New observations of a great big cosmic collision provide the best evidence yet that invisible and mysterious dark matter really does exist.

The collision, between two huge clusters of galaxies, is the "most energetic cosmic event, besides the Big Bang, that we know about," said Maxim Markevitch of the Harvard-Smithsonian Center for Astrophysics in Cambridge, Mass.

Scientists announced the discovery today in a teleconference with reporters.

The normal matter in the cosmos -atoms that make up stars, planets, air and life-accounts for only a small fraction of what must exist, based on the fact that without an additional source of gravity, galaxies would fly apart and galaxy clusters could not hold together as they do. Nobody knows where all that gravity comes from, so scientists say there must be some invisible stuff out there, which they call dark matter. Its presence is indirectly supported by many observations. Given what's known, this is the makeup of the universe:

Dark energy is an even more mysterious phenomenon, a force of some sort that beats out gravity and is causing the universe to expand at an ever-faster pace.

Some theorists have suggested that rather than invoking dark matter, perhaps existing ideas about gravity might be wrong. Maybe gravity is stronger on intergalactic scales than what is predicted by Newton and Einstein.

And all astronomers agree that dark matter is such an exotic idea as to border on the crazy.

"A universe that's dominated by dark stuff seems preposterous, so we wanted to test whether there were any basic flaws in our thinking," said Doug Clowe of the University of Arizona at Tucson, and leader of the study. "These results are direct proof that dark matter exists."

Clowe and colleagues used NASA's Chandra X-ray Observatory to study the galaxy cluster 1E0657-556, which contains a bullet-shaped cloud of superheated gas. X-rays show the shape was produced by cosmic winds created in a high-speed collision of two clusters of galaxies.

Other telescopes were used to locate and quantify the mass in the clusters. They actually measured the effect of gravitational lensing, in which gravity from the clusters distorts light from thousands of background galaxies, as predicted by Einstein's theory of general relativity.

The dark matter is not seen, but its gravity has a predictable effect on the observations. The resulting blue color in a new image represents the gravity fields observed by noting how the light from each background galaxy is distorted. [Image]

Here's what the image reveals:

The hot gas-normal matter-was slowed by a drag force described as the cosmic equivalent of air resistance. But the dark matter was not slowed by this effect, presumably because it does not interact with normal matter, as theory had predicted.

So the normal matter and dark matter became separated.

"This proves in a simple and direct way that dark matter exists." Markevitch said in the teleconference.

Other theories must cope

The finding provides further evidence that standard Newtonian gravity, which keeps planets in orbit around the Sun, is the glue that makes things stick on the largest scales, too.

It is still possible there is some modification of gravity going on, but these findings make it less necessary to have such theories, said Sean Carroll, a cosmologist at the University of Chicago who was not involved with the study. "No matter what you do [in devising new theories] you're going to have to believe in dark matter."

"We've closed this loophole about gravity, and we've come closer than ever to seeing this invisible matter," Clowe said. "This is the first time we've had a direct detection of dark matter" in which you can't explain the results with any altered-gravity theory, he said.

The findings will be detailed in an upcoming issue of the Astrophysical Journal Letters.