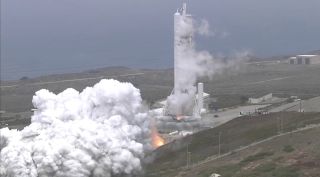 The private spaceflight company SpaceX will launch an Earth-observing satellite into orbit today (Aug. 24) and then attempt to land its Falcon 9 rocket offshore — and you can watch all the action live online.

SpaceX will launch the Formosat-5 satellite for Taiwan's National Space Organization from a pad at Vandenberg Air Force Base in California. Liftoff is set for 11:51 a.m. PDT (2:51 p.m. EDT/1851 GMT). You can watch the launch live here, courtesy of SpaceX, starting 10 minutes before liftoff. Or, you can watch it directly from SpaceX via the company's YouTube channel here.

While the primary goal of today's launch is to send Formosat-5 into orbit, SpaceX also plans to land the first stage of its Falcon 9 rocket on the company's drone ship "Just Read the Instructions" about 10 minutes and 47 seconds after liftoff. Landing the Falcon 9 boosters is part of SpaceX's reusable-rocket program aimed at lowering the cost of spaceflight. The company successfully launched two used Falcon 9 rocket stages this year and landed many more, most recently on Aug. 14 after a Dragon cargo ship launch for NASA.

It will take about 11 minutes for Formosat-5 to be deployed into space, according to a SpaceX mission profile.

"FORMOSAT-5 is the first space program that Taiwan's National Space Organization (NSPO) has taken full responsibility for the design, development and system integration of," SpaceX representatives wrote. "The program's mission is to promote space science experiments and research, to enhance Taiwan's self-reliant space technology capabilities, and to continue to serve the users of FORMOSAT-2's global imagery services." Taiwan's Formosat-2 satellite launched in May 2004.

The Formosat-5 satellite is designed to operate in a sun-synchronous orbit about 447 miles (720 kilometers) above Earth. The satellite's primary instrument is an Earth-observing camera system capable of 2-meter (6.5 feet) resolution in black and white, and 4-m (13 feet) resolution in color. The satellite also carries a secondary Advanced Ionospheric Probe instrument built by Taiwan's National Central University.

SpaceX has a 42-minute launch window for today's Formosat-5 liftoff. The company also has tomorrow (Aug. 25) available as a backup launch day if needed.