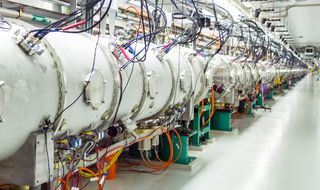 Forty-three years ago, theoretical physicist Daniel Freedman predicted that neutrinos, the little-understood and elusive particles that travel through all types of matter, can, under certain circumstances, interact in a way that would make them much easier to detect. Now, for the first time, an international research team has proved the phenomenon, called coherent scattering, experimentally with the world's smallest neutrino detector.

The results could pave the way for major advances in neutrino research and novel technologies for monitoring nuclear reactors, the scientists said.

"It has been kind of a holy grail in neutrino physics," Juan Collar, a professor of experimental physics at the University of Chicago told Live Science. [The 18 Biggest Unsolved Mysteries in Physics]

Collar is one of 80 researchers from 19 institutions and four nations involved in the new study, which was published online Aug. 3 in the journal Science. "For 40 years, we have tried to measure this process. I have myself tried with other technologies at least twice before, and a lot of other people have tried, and we have been failing," Collar said.

Typically, neutrino detectors weigh thousands of tons, but Collar and his colleagues built a novel detector that weighs only 32 lbs. (14.5 kilograms), which makes it easily portable and therefore suitable for use in various situations, they said.

For the experiment, the physicists placed the detector approximately 65 feet (20 meters) away from the Spallation Neutron Source (SNS) at Oak Ridge National Laboratory in Tennessee. SNS is used mainly as a source of neutrons, but it manufactures neutrinos as a byproduct. The scientists were able to measure the coherent scattering of the neutrinos off atom nuclei of the detector. Typically, neutrinos interact with individual protons or neutrons inside a nucleus. But in coherent scattering, predicted by Freedman in 1974, an approaching neutrino interacts with the entire charge of the nucleus.

"This form of interaction is kind of unique — it's very different from all other ways in which we have seen neutrinos in action," Collar said. "The problem is that the outcome of this interaction, what we can detect, after the neutrino hits your target, is very subtle. It's just a very-low-energy kick to the nucleus."

The effect is akin to what happens at the beginning of a game of pool: The cue ball strikes the first ball in a triangle of balls placed in the middle of the pool table, and the energy spreads from one ball to the next, sending them in many directions, Collar explained.

"It's similar to what's happening on the atomic scale," Collar said. "The neutrino comes and kicks the whole nucleus, and the nucleus bumps into the nuclei nearby. And it creates a little bit of concentrated disorder, and out of that, a little bit of light comes out."

But unlike in the game of pool, the effect of the neutrinos on the nuclei is extremely subtle, Collar said. [Wacky Physics: The Coolest Little Particles in Nature]

To measure the light coming from the interaction, the researchers used a special scintillatorcrystal that emits light when hit by a particle. To increase the luminescence, the researchers doped the cesium iodide crystal with sodium.

According to Collar, this technique makes it up to 100 times more probable to detect neutrinos.

"Neutrinos are very mysterious particles," Collar said. "People call them 'ghost particles' because they can go through the Earth without interacting. Of all the particles we know, they are the ones that have the smallest probability of interaction with any other known form of matter."

Because neutrinos are reluctant to interact, physicists still have a limited understanding of these particles, which were discovered in 1959.

Collar hopes the new research will lead not only to advances in neutrino science but also practical applications, especially in the nuclear industry. For example, because neutrinos travel effortlessly through the walls of nuclear reactors, they could be used to understand what is going on inside the reactor, he said.

"You could take such a portable detector next to a nuclear reactor and monitor the neutrino flux coming out of it," Collar said. "This neutrino flux is actually incredibly rich in information about what the reactor operator is really doing inside. It's relatively easy for a reactor operator to declare intentions of just generating power, but behind the scenes, they can be producing weapons-grade material."

The recent experiment was part of the COHERENT project, which will now continue with testing other detectors.