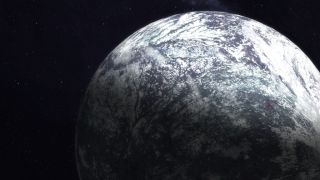 The finding suggests that there may be fewer potentially habitable worlds than scientists previously thought, the researchers said.

Whereas Venus seems too hot for life and Mars seems too cold, Earth lies between Venus and Mars, where temperatures have the potential to be just right for its surface to possess liquid water. This "Goldilocks" zone is also known as the habitable zone, because on Earth, there is life virtually wherever there is liquid water.

Stars like the sun brighten over time. This raises the possibility that a planet or moon that starts out cold and icy around a young dim star, such as early Earth, may eventually warm to a stable habitable state as the star grows more luminous. [How Habitable Zones for Alien Planets and Stars Work (Infographic)]

However, the new study finds that some planets may go directly from a Mars-like icehouse stage to a Venus-like hothouse phase, bypassing Earth-like habitable conditions.

"Previously, studies suggested that icy planets and moons, such as [Jupiter's moon] Europa, will become habitable for life after their surface ice or snow melts," said study lead author Jun Yang, of Peking University in Beijing. "Our work shows that this will not happen."

The climate of a water-rich planet depends on at least two factors. One is how much ice covers its surface. Ice has a high albedo, meaning it reflects much of the light that falls onto it back to space before the light can warm the planet's surface. In this way, the ice cools the planet, which leads to the formation of more ice and makes the planet even colder. The second factor is the amount of water vapor in the planet's atmosphere; water vapor is a greenhouse gas that traps heat, warming a planet, which leads more water to evaporate and makes the planet even warmer.

The albedo of ice plays a dominant role in the climate of icy planets. A 2004 study suggested that Earth escaped a possible "snowball phase" because the sun brightened over time and because volcanic activity on Earth released carbon dioxide and other greenhouse gases that helped the planet retain heat.

In contrast, many icy bodies, such as Jupiter's moon Europa and Saturn's moon Enceladus, do not release large amounts of greenhouse gases via volcanoes. As such, researchers wanted to see how these worlds evolved if they had only the light of their stars to help warm them.

In the new study, the scientists developed a global climate model that simulated the evolution of the climate of an icy planet lacking greenhouse gases other than water vapor. This 3D computer model included multiple layers of the atmosphere, as well as winds and their effects on temperatures, clouds, water vapor, snow and ice, according to the study.

The researchers found that, without the presence of greenhouse gases besides water vapor, icy bodies needed a lot of energy from their stars before they started melting — about 10 to 40 percent more than Earth gets from the sun. When the ice finally did melt in simulations, the resulting drop in albedo made these worlds much warmer very quickly. This rapid warming often led to greenhouse stages in which most or all of the water oceans vaporized, rendering these worlds uninhabitable for water-based life as it is known on Earth.

"The finding suggests the number of potentially habitable planets and moons may be less than previously estimated, especially for small icy planets and icy moons," Yang told Space.com.

The paper detailing the new findings was published online July 31 in the journal Nature Geoscience.