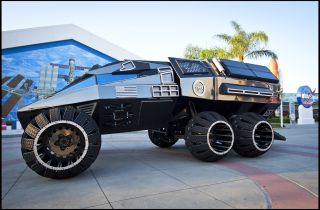 NEW YORK — Calling all space nerds! From Aug. 1-6, immerse yourself in all things interstellar at the Space & Science Festival, hosted by the Intrepid Sea, Air & Space Museum in New York. (And check out Space.com's booth Aug. 5-6 to enter to win eclipse gear and see some Lego space kits!)

The museum, located on a docked aircraft carrier at Pier 86 on Manhattan's West Side, will host a weeklong celebration of humanity's quest to understand the universe. There will be plenty of talks, films, creative displays and special guests — like the staff here at Space.com! — to satiate your cosmic appetite.

The Intrepid Museum has been home to the space shuttle Enterprise since 2012, and it hosted an interactive "Star Trek" exhibit in 2016.

All of the 2017 Space & Science Festival activities on Pier 86 are free, except for the "Drones: Is the Sky the Limit?" exhibit. Presentations in the museum and the Space Shuttle Pavilion are free with museum admission.

The full schedule for the Space & Science Festival is large, so bring comfortable shoes! Below, Space.com has listed some festival highlights to check out.

The festival will hold some special youth events, as well. On Tuesday, Aug. 1, the Space & Science Festival will collaborate with the Harlem Week celebration to host Youth Education & Career Conference 2.0, where young people ages 13-24 can check out exhibits, demonstrations and special "Hackathon" activities. On Friday, Aug. 4, the largest youth-development organization in the country, New York State 4-H, will partner with NASA, Lego and Cornell University to hold activities from 10 a.m. to 5 p.m.

There will also be plenty of space drama to choose from. Grab tickets on Friday, Aug. 4, or Saturday, Aug. 5, for the creative play "Moon Shot: A Big Story on a Small Stage," showing at 8 p.m. both nights. For a cool cinematic experience, guests can bring lawn chairs and picnic blankets to an outdoor screening of "The Martian" on Aug. 1 as part of the Intrepid Museum's Summer Movie Series. For a more in-depth film viewing, attend the Thursday, Aug. 3, screening of "Hidden Figures," which will include a panel with special guests from NASA.

For whole families that are fans of the cosmos, the Space & Science Festival will host a Family Astronomy Night on Friday, Aug. 4, with the manager of the Mars Helicopter project at NASA's Jet Propulsion Laboratory. On Saturday, Aug. 5, come learn about the Intrepid itself and its role in the space race at 11 a.m. Last but not least, make room in your calendar on Aug. 6 to learn about the James Webb Space Telescope. It is set to launch in 2018 to discover new clues about the Big Bang and investigate other questions scientists have about history of the universe.

Ever wanted to ask a Space.com writer about our stellar storytelling? Now's your chance! Be sure to visit the Space.com booth on Saturday, Aug. 5, and Sunday, Aug. 6, to meet our galactic newsroom. Join us as we build a Lego Curiosity Mars rover for its landing's fifth anniversary.

To learn more about the Intrepid museum and its Space & Science Festival, visit: https://www.intrepidmuseum.org.