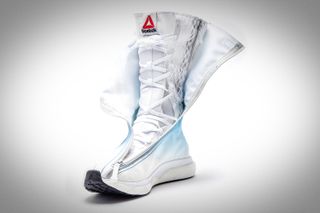 Reebok is really stepping up its footwear game with these awesome new space boots.

The athletic-apparel company — which until now has only made shoes for people on Earth — just unveiled a sporty new design for space boots that astronauts will wear during upcoming missions on Boeing's CST-100 Starliner, a spacecraft that will begin ferrying astronauts to and from the International Space Station by the end of next year.

These blue-and-white ombré boots nicely complement the blue spacesuits Boeing revealed in January. Both the boots and the suits are more lightweight, flexible and comfortable than the bulky, traditional spacesuits worn by astronauts today. [Photos: Meet the 'Boeing Blue' Spacesuit for Starliner Capsule]

Dan Hobson, vice president of innovation at Reebok, spoke with Digital Trends about how and why the company came up with its futuristic space boot design.

"Space travel is something our team has always been interested in, so we called the David Clark Company (DCC), and that's how it started," Hobson told Digital Trends. DCC is the same manufacturing company that designed Boeing's blue spacesuits. It also made pressurized spacesuits for crewmembers participating in NASA's Gemini program and space shuttle missions.

Rather than looking to traditional, clunky moon boots for inspiration, Reebok and DCC modeled their new space boot after Reebok's Floatride Run athletic shoes, which contain ultralight foam that adds comfort without adding too much weight to the midsole. "On the space boot, the rubber traction, the float foam and the stabilizing foam that sits above the float foam are identical to the Floatride Run, so the feel underfoot will feel very similar," Hobson explained. Reebok named its new boot the Floatride SB-01.

Much like Boeing's Starliner spacesuits, the boots are designed to fit every individual astronaut like a glove. "The inside uses a special mesh that stretches to a certain point, then locks out when the suit inflates, which allows the boot to always fit comfortably," Hobson said.

With their matching boots and spacesuits, astronauts will be riding in style on Boeing's future flights to the space station. But more importantly, the new apparel will help make spaceflight more comfortable for astronauts than ever before.

You can see Digital Trends' full interview with Hobson here.