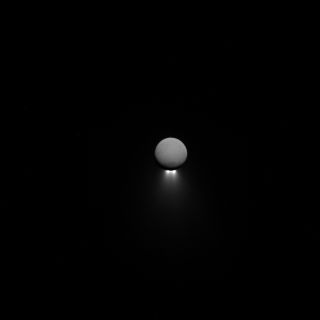 Saturn's moon Enceladus releases jets of water ice as imaged by the Cassini spacecraft in April. The moon shines in reflected Saturn light, while the jets are backlit by the sun.
(Image: © NASA/JPL-Caltech/Space Science Institute)

A photo of Saturn's moon Enceladus looks poised for liftoff as jets fly from its southern hemisphere.

While Enceladus can't fly — at least outside of its ordinary orbit around the ringed planet — its remarkable icy jets intrigue scientists because they hint at a subsurface ocean that could support life.

The photo, taken by the Cassini spacecraft, spotlights the moon's Saturn-facing hemisphere, which is 313 miles across (504 km), according to NASA's image caption. The jets are backlit by sunlight, while the front shines with light reflected back from Saturn. Cassini was 502,000 miles (808,000 km) from Enceladus when it captured the visible-light image with its narrow-angle camera on April 13, and the image shows 3 miles (5 km) per pixel.

Enceladus' fierce jets emerge from a series of ridges in its southern hemisphere nicknamed "tiger stripes." Cassini first spotted the jets in 2005, and dove through the plumes multiple times; in 2015, it passed within 30 miles (50 km) of the moon's surface while sampling their composition. Data from that flyby suggested that its subsurface ocean might have enough energy, suggested by the existence of molecular hydrogen, to host life similar to microbes on Earth. Besides water ice, the plumes contain traces of methane, ammonia, carbon monoxide, carbon dioxide, salts and simple organic molecules.

Cassini is a collaboration among NASA, the European Space Agency and the Italian Space Agency, and it has orbited Saturn since 2004. The probe is in the Grand Finale phase of its mission, as it makes close flybys between Saturn and its rings before plunging down into the planet's atmosphere Sept. 15. That dive is partially motivated by a desire to protect the little icy moon — as Cassini ran out of fuel, its orbit could have become unstable and led to it crashing and contaminating moons in Saturn's neighborhood.