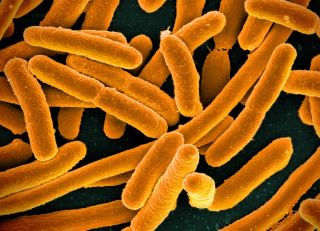 The researchers examined the biological processes of E.coli, a common bacteria.
(Image: © NIAID)

A common bacteria is furthering evidence that evolution is not entirely a blind process, subject to random changes in the genes, but that environmental stressors can also play a role.

A NASA-funded team is the first group to design a method demonstrating how transposons — DNA sequences that move positions within a genome — jump from place to place.

The researchers saw that the jumping rate of these transposons, aptly-named "jumping genes," increases or decreases depending on factors in the environment, such as food supply. [The Strangest Alien Planets (Gallery)]

"This is a new window into how environment can affect evolution rates," said Nigel Goldenfeld, director of the NASA Astrobiology Institute for Universal Biology at the University of Illinois at Urbana-Champaign. "We can measure evolution rates for the first time, and we can see evolution acting at the molecular level."

Thomas Kuhlman, a physicist at the University of Illinois, Urbana-Champaign, said bacteria species can also play a role in jumping rates, as well as the environment.

"The activity of these transposal elements is not uniformly random; it's not just a pile of cells," he said.

Kuhlman and Goldenfeld recently published a paper on the research, "Real-time transposable element activity in individual live cells," in the Proceedings of the National Academy of Sciences.The research was led by Neil Kim, a physics graduate student at the University of Illinois at Urbana-Champaign, and also included work from fellow students Gloria Lee, Nicholas Sherer and Michael Martini.

Goldenfeld studies the role of the environment on evolution, while Kuhlman focuses on the biological processes of E. coli, a common bacteria that lives in the digestive tracts of humans and animals and the cause of infections by way of contaminated feces. The two researchers came up with a novel approach to watching the movement of jumping genes by engineering an E. coli that expresses a fluorescent protein when the transposons "jump" out of a genome. Because the cell lights up when this occurs, the researchers were able to record the cells that jump more than others.

Goldenfeld's team also constructed a computer simulation of the jumping activity that was able to rule out random activity as the primary reason for jumping. Once they compared the simulation with the laboratory trials, it was clear that the transposons were not jumping randomly. Goldenfeld said the findings shed more light on the mechanisms of evolution.

A fundamental assumption of evolution has been that mutations and other instabilities in the genomes randomly occur in an organism as a 'blind" evolutionary force, and those that are beneficial to the cell lead to reproductive success. Another possibility, less accepted by biologists, is that the environment prompts the cell or organism to mutate in order for the cell to prosper better. These adaptive mutations, or stress-induced mutations, occur in response to stressors in the environment.

"This conclusion," he added, "was already known through other studies, for certain types of mutation, so is not in itself a complete reversal of the current dogma. We hope that future work will try to measure whether or not the genome instabilities that we can measure are adaptive."

Kuhlman said he has hopes of future research on more complex organisms.

"The next step is operating in yeast, as a very simple eukaryotic cell. Then eventually much further down the road, we'll get [the process] working in mammalian or human cells."

The research is not only useful for understanding the origins of life, but also uncovering situations where cells undergo rapid mutations. One possible application could be routing out the pathways of cancer, which happens when cells abnormally grow and cause problems with the rest of the body.

Goldenfeld added that the findings also have clear implications to astrobiology.

"One of the things that astrobiology is concerned with is the interaction between the environment and the rate of evolution," he said. "Our work showed for the first time that there are environmental influences on the rate of transposon activity, because we could literally measure the effect. We did this quantitatively and compared it with theoretical predictions that assumed that transposon activity was random. We could show that the activity is not random at all."