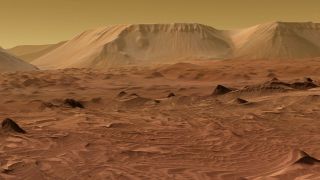 This high-res visualization of the Martian surface shows the inside of Candor Chasma, a canyon in Valles Marineris with walls as high as the Rocky Mountains (15,000 feet, or 4,500 meters).
(Image: © OpenSpace/YouTube)

Have you ever wished you could go to Mars without taking on the long-term commitment and risks associated with spaceflight? Now you can explore the surface of Mars without leaving the comfort of planet Earth, thanks to troves of imagery from NASA spacecraft and a cool data-visualization software called OpenSpace.

With OpenSpace, you can fly over Martian mountaintops and swoop through the deep canyons of Valles Marineris with the highest-resolution views from NASA's Mars Reconnaissance Orbiter (MRO), creating sort of a Google Earth for Mars. And that's just the beginning; the makers of OpenSpace said they aim to ultimately map the entire known universe with dynamic and interactive visualizations created from real scientific data.

Using data and images from the Context Camera (CTX) on MRO and the Mars rovers Spirit and Opportunity, researchers have already mapped 90 percent of the Red Planet's surface down to a resolution of about 20 feet (6 meters) per pixel. Incorporating high-resolution images from the spacecraft's HiRISE camera (High-Resolution Imaging Science Experiment), OpenSpace has allowed researchers to image parts of Mars down to a resolution of about 25 centimeters (10 inches) per pixel. That's 24 times sharper than before. [Latest Photos from NASA's Mars Reconnaissance Orbiter]

NASA and SpaceX have used HiRISE to look at potential landing sites for upcoming robotic missions like the Mars 2020 rover and Red Dragon sample-return mission, because the camera can resolve details in the terrain and determine whether it's safe for a rover to touch down and drive around there. When HiRISE isn't looking at landing sites, scientists use it to study other aspects of the Martian surface.

Since MRO arrived at the Red Planet 11 years ago, HiRISE has taken more than 4,500 stereo images of the Martian surface. The U.S. Geological Survey has so far gotten around to processing only about 380 of these images to incorporate them into a map of the Martian terrain.

That's where OpenSpace comes in. In a partnership with the American Museum of Natural History in New York City and Linköping University in Sweden, researchers and student interns have been working to turn loads of data into stunning, interactive visualizations. "We have figured out the technique where we can do that ourselves with a massive photogrammetry tool kit called the NASA Ames Stereo Pipeline," Carter Emmart, the director of the astrovisualization program at the museum and creative lead of OpenSpace, told Space.com.

NASA had warned Emmart and his colleagues against working with these images "because they're extremely data intensive," he said, "but we've worked that out with our production systems staff here at the museum and together with the high school students, so we have a pipeline for cherry-picking essentially these interesting areas that have not been processed yet."

With high-resolution, 3D renditions of the Martian landscape, you can make out small surface features like sharp mountain peaks and rocks as small as footballs. You can even find NASA's Curiosity rover and its landing site, where some hardware was left behind, and what's left of the European Space Agency's Schiaparelli lander that crashed on Mars in October.

Since they started working in 2002, Emmart and his student interns have created "a unique visual system for looking at what we call our digital universe — data that essentially goes from the Earth to the macroscales of the universe."

Beyond Mars, the researchers are already planning to build these types of visualizations for Earth's moon, Pluto, Mercury, and Saturn's moons Titan and Enceladus, with the ultimate and ambitious goal of visualizing the entire universe. OpenSpace also visualizes space weather events, like solar flares and coronal mass ejections, which can affect Earth's satellites and other spacecraft throughout the solar system.

Eventually, OpenSpace visualizations will be available on YouTube in the form of 360-degree videos, Emmart said. For now, those who wish to embark on a journey to Mars with OpenSpace can do so at New York's Hayden Planetarium. On Aug. 1, Emmart will give his Mars presentation together with the MARSBAND, a group of musicians who will play live music to accompany the Martian tour. (You can buy tickets to this event here.)

Because OpenSpace is an open-source software, you can access the source codes online for free and start building your own visualizations. Or you can watch a demonstration of the Mars visualization by OpenSpace on YouTube.