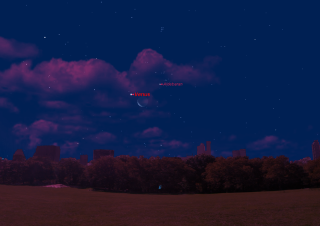 One of the brightest and most colorful stars in the sky will join the most brilliant planet in the early dawn sky this week — and the duo will rendezvous with the moon on Thursday morning (July 20).

The star in question is Aldebaran, a first-magnitude star that shines with a distinct orange hue and marks the angry right eye of Taurus, the Bull. The brilliant planet is, of course, Venus, which outshines Aldebaran by almost five magnitudes — or a light ratio difference of almost 100-fold.

Right now, both star and planet can be seen about one-quarter of the way up from the eastern horizon roughly 45 minutes before sunrise. [Night Sky: Visible Planets, Moon Phases & Events, July 2017]

Venus, which appears as a dazzling morning "star," rises about an hour before the first light of dawn and shines low in the east-northeast as dawn brightens. On Thursday morning, you'll also see a delicately thin (12 percent illuminated) crescent moon hovering a little over 3 degrees to Venus' lower right. At arm's length, the width of a dime is equal to about 2 degrees, so on Thursday morning, the slender lunar sliver will appear about "1.5 dimes" to the lower right of Venus. In a telescope, Venus is a disappointment: just a tiny, gibbous blob. It has shrunk and become more nearly round in recent months as it has swung far around to the back side of the sun as seen from Earth.

And situated well to the upper right of both Venus and the moon will be Aldebaran. The trio will appear to form an isosceles triangle with Aldebaran marking the vertex angle, while Venus and the moon form the base of the triangle. It will not be a particularly "tight" array, but still should be attractive enough to catch the attention of early risers.

The reappearance of Aldebaran is also a gentle reminder that while we are not yet at the midpoint of summer, the colder nights of fall and winter will be looming. Aldebaran is crossing the meridian at midnight around Thanksgiving, and around 9 p.m. in mid-January.

Who knows? By then, some of you might be shoveling snow.

So take advantage of this week's opportunity to see not only an out-of-season winter star, but Venus as well, while they also both "flirt" with a waning crescent moon.

Joe Rao serves as an instructor and guest lecturer at New York's Hayden Planetarium. He writes about astronomy for Natural History magazine, the Farmer's Almanac and other publications, and he is also an on-camera meteorologist for Fios1 News based in Rye Brook, New York. Follow us @Spacedotcom, Facebook and Google+. Original article on Space.com.