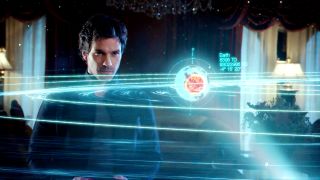 In "Salvation," which debuted July 12 on CBS, an MIT grad student, Liam Cole (Charlie Rowe), and a tech superstar, Darius Tanz (Santiago Cabrera), along with others plan for a deadly asteroid heading toward Earth.

Read more about "Salvation," and an interview with its creators, here.

The asteroid Cole discovered is a mere six months from hitting the planet.

The duo brings startling news of an asteroid barreling toward Earth to Pentagon officials including Grace Barrows (Jennifer Finnigan) — but it turns out some of them already know.

"Salvation," a suspense thriller, began its first season on Wednesday, July 12 at 9 p.m. on CBS. Here, Tanz poses in thought.

Tanz, Burrows and Cole must do what they can to avert an apocalypse in "Salvation."

Getting to the Insiders

"Salvation" connects a grad student, a tech superstar and a Pentagon official together to save the Earth, and it's inhabitants, in less than six months.

Meeting Those in Charge

The CBS premiere brings to the small screen a real danger — an asteroid will collide with Earth, precipitating the end of life as we know it. Here, Tanz, Burrows and Cole meet with Deputy Secretary of Defense Harris Anders (Ian Anthony Dale), who already knew about the asteroid threat.

The Powers that Be

Jennifer Finnigan, as Grace Barrows, must use the information she's been given to save the Earth in her position at the Pentagon.

On an upcoming episode of "Salvation," the CBS suspense thriller, MIT grad student Liam and tech superstar Darius work on a device to divert the asteroid.

Meanwhile Grace puts everything on the line to assist Darius. Back in Boston, Liam searches for critical research and uncovers shocking new information.

The Pentagon decides to shut Darius down so he must accelerate his plans to sop the asteroid.