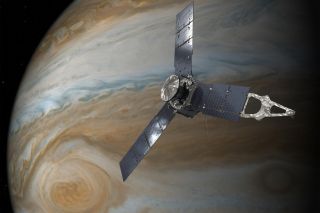 All of the probe's science instruments were operational, NASA officials said in a statement, as was the craft's JunoCam. Data and photos are now streaming back to Earth. Raw images of the gigantic storm, 1.3 times as wide as Earth, should be posted in the next few days, NASA said.

"For generations, people from all over the world and all walks of life have marveled over the Great Red Spot," Scott Bolton, Juno's principal investigator, from the Southwest Research Institute in San Antonio, said in the statement. "Now we are finally going to see what this storm looks like up close and personal."

Juno launched in 2011 and arrived at Jupiter on July 4, 2016. During a series of long orbits, the spacecraft is diving down to investigate the gas giant planet over 12 flybys. The researchers will combine Juno's observations of the Great Red Spot with data gathered by ground-based telescopes on Earth to discern what's happening deep inside the whirling storm.