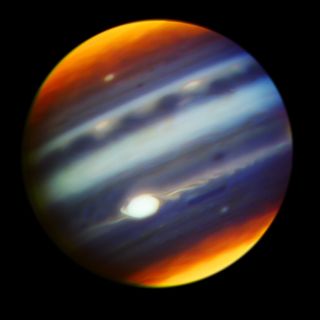 In this composite, false-color image, haze particles seen in reflected sunlight are tracked over a range of altitudes with the Gemini North telescope in Hawaii on May 18. On the same night, the Subaru Telescope — also in Hawaii — took detailed measurements of different layers of the planet's atmosphere.
(Image: © Gemini Observatory/AURA/NASA/JPL-Caltech)

The Juno spacecraft is preparing to fly close over Jupiter's Great Red Spot, with a little help from the probe's ground-based friends.

On July 10, Juno will pass just 5,600 miles (9,000 kilometers) above the centuries-old storm, which is about twice the diameter of Earth. The probe will turn its many instruments to the job of determining what drives the storm and how deeply it penetrates into the gas giant planet.

But the Juno scientists aren't going in blind: In May, the Subaru and Gemini North telescopes in Hawaii coordinated to measure Jupiter at a variety of different wavelengths, contributing information about the atmosphere at different depths within the Great Red Spot.

"Observations with Earth's most powerful telescopes enhance the spacecraft's planned observations by providing three types of additional context," Glenn Orton, a Juno science team member based at NASA's Jet Propulsion Laboratory in California, said in a statement. "We get spatial context from seeing the whole planet. We extend and fill in our temporal context from seeing features over a span of time. And we supplement with wavelengths not available from Juno."

"The combination of Earth-based and spacecraft observations is a powerful one-two punch [in] exploring Jupiter," Orton added.

Researchers from Gemini, Subaru, the University of California, Berkeley, and Tohoku University in Japan collaborated to plan the set of observations completed on May 18, NASA officials said in the statement.

The Gemini North telescope examined Jupiter through near-infrared filters that pick up light coming from beneath Jupiter's upper atmosphere and clouds, showing a "long, fine-structured wave" of methane and hydrogen stretching off the Great Red Spot's eastern side.

That same night, researchers used the Subaru Telescope to investigate the mid-infrared, revealing different layers of the planet's atmosphere. Subaru's view showed the Great Red Spot's "cold and cloudy interior increasing toward its center, with a periphery that was warmer and clearer," Orton said. "A region to its northwest was unusually turbulent and chaotic, with bands that were cold and cloudy, alternating with bands that were warm and clear."

Researchers can combine these new observations with other ground-telescope views of the gas giant to plot out what to expect for Juno's dramatic flyby. NASA's Juno mission has spent one year exploring the planet, as of July 4, and will spend 32 orbits exploring the planet before the mission ends in February 2018.