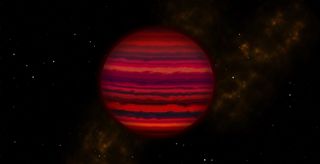 Artist's illustration of how the nearby brown dwarf WISE 0855 might appear if viewed close-up in infrared light.
(Image: © Joy Pollard, Gemini Observatory/AURA)

For the first time ever, astronomers have found strong evidence of water clouds on a body outside the solar system.

New observations of a frigid object called WISE 0855, which lies 7.2 light-years from Earth, suggest that the "failed star" has clouds of water, or water ice, in its atmosphere, the researchers said.

"We would expect an object that cold to have water clouds, and this is the best evidence that it does," study lead author Andrew Skemer, an assistant professor of astronomy and astrophysics at the University of California, Santa Cruz, said in a statement released by the university. [Frigid Brown Dwarf May Have Water-Ice Clouds (Video)]

WISE 0855 is five times more massive than Jupiter, making it a brown dwarf — an object too large to be a planet but too small to spark the internal fusion reactions that power stars (a fact that explains another name for these bodies: "failed stars").

Scientists discovered WISE 0855 in 2014, using data from NASA's Wide-field Infrared Survey Explorer (WISE) spacecraft. A later paper in 2014 (co-authored by Skemer) uncovered some evidence of water clouds in the object's atmosphere, based on limited photometric data (how bright the object is in specific light wavelengths).

In the new study, Skemer and his colleagues used the Gemini North telescope in Hawaii to study the brown dwarf for 13 nights. Gemini North is located on the highest Hawaiian mountain (Mauna Kea), at an altitude with little water vapor to interfere with telescopic observations.

WISE 0855 is "five times fainter than any other object detected with ground-based spectroscopy at this wavelength," Skemer said in a different statement. "Now that we have a spectrum, we can really start thinking about what's going on in this object. Our spectrum shows that WISE 0855 is dominated by water vapor and clouds, with an overall appearance that is strikingly similar to Jupiter."

Specifically, the spectrum of WISE 0855 appears very similar to the water-absorption features found in Jupiter's atmosphere. But there also are some differences, such as the amount of phosphine (a compound of phosphorous and hydrogen): Jupiter has a lot of it; WISE 0855 does not.

Phosphine is created in the scalding-hot interiors of objects, so its presence in an atmospheric spectrum suggests that a lot of mixing has gone on. So, based on phosphine concentrations, it appears that Jupiter's atmosphere is much more turbulent than that of WISE 0855, study team members said.

The new research was published in The Astrophysical Journal Letters.