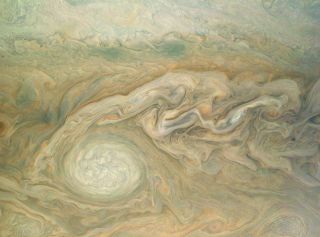 Jupiter's Little Red Spot takes center stage in this enhanced color photo from NASA's Juno spacecraft in orbit around the planet. The image was taken Feb. 2, 2017 (and released May 18) and was processed by citizen scientist Bjorn Jonsson using data from Juno's JunoCam instrument.
(Image: © Bjorn Jonsson/NASA/JPL-Caltech/SwRI/MSSS)

NASA's Juno spacecraft in orbit around Jupiter just had its sixth close encounter with the giant planet.

Juno skimmed the cloud tops of Jupiter today (May 19) at a range of just 2,200 miles (3,500 kilometers) during its close approach, NASA officials said. That closest approach occurred at 2 a.m. EDT (0600 GMT), they added. The manuever marked the sixth time Juno's orbit has brought it up close and personal with Jupiter, and the fifth science flyby of the mission. [Juno Probe's Jupiter Images as Stunning Art]

"During these flybys, Juno is probing beneath the obscuring cloud cover of Jupiter and studying its auroras to learn more about the planet's origins, structure, atmosphere and magnetosphere," NASA officials wrote in a May 18 statement.

NASA celebrated the Juno flyby this week by showcasing a stunning photo of the Little Red Spot, a gigantic storm on Jupiter that — despite its size — is still smaller than Jupiter's iconic stormy landmark: the Great Red Spot. The newly released image was actually captured on Feb. 2 during an earlier flyby and was processed by citizen scientist Bjorn Jonsson using data from Juno's JunoCam instrument. New photos from today's Jupiter flyby are expected to be released Tuesday (May 23), according to a Juno mission update.

The Juno spacecraft orbits in a highly elongated orbit that brings the probe close to Jupiter once every 53 days. A plan to reduce that timeframe to allow close encounters every 14 days was scrapped in February due to problems with helium valves on Juno.

NASA launched the $1.1 billion Juno mission to Jupiter in 2011. The spacecraft carries seven instruments to study Jupiter's clouds and interior structure. Juno arrived at Jupiter on July 4, 2016 and will circle the planet 32 times before its mission ends in February 2018, NASA officials have said.