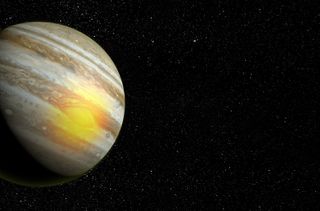 Observations show that Jupiter's upper atmosphere — above the Great Red Spot — is hundreds of degrees hotter than anywhere else on the planet.
(Image: © Dillon Yothers with Luke Moore)

Jupiter's Great Red Spot is apparently also red hot: The highest temperatures ever observed on the planet were recently detected in the region above the ginormous storm.

The Great Red Spot (GRS) is a massive storm about twice the diameter of Earth that lies in lowest layer of Jupiter's atmosphere. About 497 miles (800 kilometers) above this humongous storm, astronomers measured temperatures reaching about 700 degrees Fahrenheit (about 370 degrees Celsius) higher than normal, James O'Donoghue, lead author of the new study and a research scientist with Boston University's (BU) Center for Space Physics, told Space.com.

The new finding could solve the mystery of the unusually high temperatures observed throughout Jupiter's upper atmosphere, which can't be explained by solar heating alone.[Jupiter's Great Red Spot: Photos of the Solar System's Biggest Storm]

Generally, atmospheric temperatures on Jupiter are around 1,700 degrees F (around 930 degrees C), with the exception of areas above the planet's poles, which are heated by auroras. Above the Great Red Spot, however, the atmosphere is about 2,420 degrees F (about 1,330 degrees C), O'Donoghue said.

Previous heat-distribution models suggested that Jupiter's atmosphere should be much cooler, largely because the planet is about fives time further from the sun than Earth is. So, having ruled out solar heating from above, the authors of the new research found evidence suggesting this atmospheric heating is largely driven by a combination of gravity waves and acoustic waves generated by turbulences in the atmosphere below the Great Red Spot. The new study was published today (July 27) in the journal Nature.

Atmospheric gravity waves — not to be mistaken for gravitational waves — occur when pockets of air collide with things like mountains. The resulting effect is similar to when a pebble is dropped into a lake, and ripples then form on the surface of the water.

Acoustic waves, on the other hand, are sound waves, which means they develop from compressions and refractions in the air and travel upward into the atmosphere. There, they encounter regions of lower density and break, much like ocean waves breaking on the shore. When this happens, the acoustic waves release stored kinetic energy and cause molecules and atoms in the air to move around more, which then raises the temperature, O'Donoghue said.

"Changes in density around the Great Red Spot will shoot waves in all directions," O'Donoghue added. "We believe that acoustic waves are the majority of the heating cause, because gravity waves tend to ship their energy across the planet, rather than vertically up like acoustic waves."

The GRS is a massive storm that rotates counterclockwise, colliding with the natural flow of molecules in the atmosphere, which are moving opposite the storm. These types of collisions create turbulence that creates acoustic and gravity waves, O'Donoghue said.

Using data from the SpeX instrument on the NASA Infrared Telescope Facility (IRTF) on Mauna Kea mountain in Hawaii, the researchers were able to measure the temperature of Jupiter's atmosphere, specifically around the GRS.

"The Great Red Spot is the largest storm in the solar system — it is bigger than Earth itself — so it generates a lot of turbulence that impedes the flow of air in the atmosphere," O'Donoghue said. "It is kind of like when you stir a cup of coffee and you turn the spoon around and go the opposite way. Suddenly, there is a lot of sloshing [turbulence] going on that generates sound waves, or compressions of air, upwards for you to hear."

The heat generated from the acoustic and gravity waves has a localized effect, which suggests there is a coupling between low and high altitudes, as energy is transferred from the lower atmosphere to the upper atmosphere. Previously, the connection between low and high altitudes was thought to be pretty much impossible because the distance is so vast, O'Donoghue explained.

"This new result from Jupiter provides the first evidence of upward coupling of energy that finds its way from the lower atmosphere to the upper atmosphere," Michael Mendillo, a professor of astronomy at BU, who was not involved with the study, told Space.com. "It's a very interesting observation — even on Earth, this mechanism is not well-studied or understood. If this happens on Jupiter, it is possible that it happens on all planets."

Giant planets like Jupiter are measured to be hundreds of degrees warmer than current temperature models predict. Before now, the extremely warm temperatures observed in Jupiter's atmosphere have been difficult to explain, due to the lack of a known heat source, Tom Stallard, co-author of the new study and an associate professor of astronomy at the University of Leicester in the United Kingdom, told Space.com.

"Sometimes, ironically, it is easier to see these features on a planet far away [from Earth]," said Stallar, who advised O'Donoghue throughout his research. In other words, "It's much more difficult to step back and see these broadscale effects … on Earth, so it's interesting to use Jupiter as a 'proxy' for what might be happening on other planets, and that includes Earth."

With the Juno spacecraft orbiting Jupiter, the researchers hope to get an up-close view of the Great Red Spot and isolate where the heat observed in the planet's upper atmosphere comes from. They also plan to study the fine details of smaller storms like Red Spot Jr., to see if there is heating above them as well.