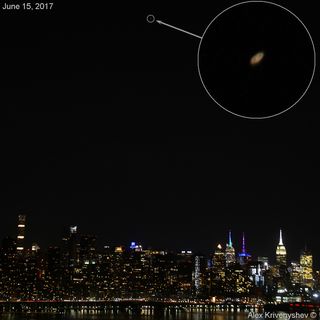 Krivenyshev, the president of WorldTimeZone.com, captured the image from Guttenberg, New Jersey, on June 15, 2017 — a very special day.

On that date, Saturn reached "opposition," meaning the ringed planet, Earth and the sun formed a straight line, with Earth in the middle. Saturn therefore got closer to our planet on June 15 than at any other day during the year — about 840 million miles (1.35 billion kilometers). (When Saturn and Earth are on opposite sides of the sun, the two planets are a little over 1 billion miles, or 1.6 billion km, from each other.)

While mid-June was the best time to see Saturn, don't despair: you'll still be able to get great views of the gas giant through July and into August. Look for a yellowish "star" low in the southern sky, from sunset through dawn.

When you gaze up at Saturn, remember how much complexity, beauty and intrigue are contained in that single point of light — the famous ring system and more than 60 known moons, for example. And there's an artificial satellite circling the planet now as well, though that won't be the case for much longer. NASA's Cassini spacecraft has been studying the Saturn system since July 2004, and it's now in the "Grand Finale" phase of its mission, which will wrap up with an intentional death dive into Saturn's thick atmosphere on Sept. 15.

Editor's note: If you have an amazing photo of Saturn or any other night-sky sight you'd like to share with us or our news partners for a possible story or image gallery, send photos and comments to managing editor Tariq Malik at spacephotos@space.com.