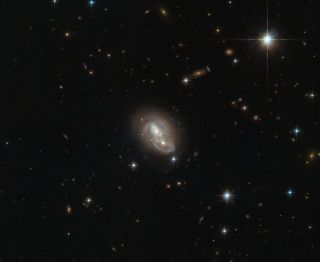 This image from the NASA/ESA Hubble Space Telescope shows the unusual galaxy IRAS 06076-2139, which lies about 500 million light-years from Earth, in the constellation Lepus (The Hare).
(Image: © ESA/Hubble & NASA)

The object, known as IRAS 06076-2139, consists of two galaxies zooming closely past each other at about 1.25 million mph (2 million km/h), NASA officials said.

"This speed is most likely too fast for them to merge and form a single galaxy," NASA officials wrote in an image description. "However, because of their small separation of only about 20,000 light-years, the galaxies will distort one another through the force of gravity while passing each other, changing their structures on a grand scale."

Galactic interactions like this one are common throughout the cosmos. Earth's own Milky Way galaxy, for example, is heading toward a merger with the giant neighboring Andromeda galaxy about 4.5 billion years from now.

"The fate of our galaxy shouldn't be alarming, though," NASA officials added. "While galaxies are populated by billions of stars, the distances between individual stars are so large that hardly any stellar collisions will occur" when the two galaxies merge.

The Hubble Space Telescope, a joint mission of NASA and the European Space Agency, launched aboard the space shuttle Discovery in April 1990. Mission team members soon realized that Hubble's primary mirror was ground to the wrong prescription, a flaw that spacewalking astronauts fixed in December 1993.

Astronauts repaired and upgraded Hubble on four additional servicing missions, one each in 1997, 1999, 2002 and 2009. NASA officials have said the iconic telescope should be able to keep observing the heavens through at least 2020, provided that nothing unforeseen happens.