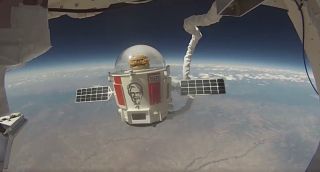 The chicken has landed, a little earlier than planned.

The flight — the first planned long-duration mission of World View's uncrewed Stratollite vehicle — was scheduled to last four days, but controllers ended it early "due to a small leak in one of the company's innovative new altitude-control balloon systems," World View CEO Jane Poynter said in a statement today (July 1).

"That said, we are extremely pleased with the results of the mission," Poynter added. "Many of these systems were flown for the very first time and tested together simultaneously. Pending an analysis of large amounts of flight data and key learnings from this mission, World View plans to launch additional Stratollite test missions with increasing flight duration in the near future."

The Stratollite is designed to operate at altitudes up to 28.5 miles (45.8 kilometers) for weeks or months at a time. The vehicle allows researchers access to a hard-to-study region that's higher than most airplanes can reach but too low for satellites, World View representatives have said.

The balloon (whose name is a portmanteau of "stratosphere" and "satellite") can travel long distances through the atmosphere or hover over the same spot on Earth for extended periods. Customers can use Stratollites for a variety of purposes, from Earth imaging to the provision of Wi-Fi service, World View representatives have said.

KFC signed on to this Stratollite test mission as a way to market the company's Zinger chicken sandwich. KFC representatives have billed the mission as a trip to space, but Stratollites don't get that high; the boundary line for space is generally regarded to lie 62 miles (100 km) above Earth's surface.

Arizona-based World View is also developing a crewed balloon system called Voyager, which is designed to take paying customers to an altitude of about 20 miles (32 km). Seats aboard a Voyager mission — which will give passengers a view of Earth's curvature against the blackness of space, without the rigors of a rocket launch — are currently selling for $75,000 apiece.