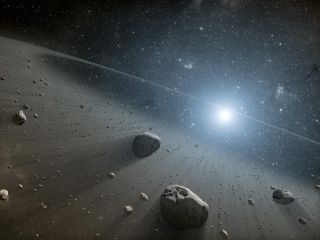 The star Vega, like Earth, has a rocky asteroid belt. On Asteroid Day, scientists around the world consider how Earth could defend itself from such celestial bodies.
(Image: © NASA/JPL-Caltech)

Today is Asteroid Day, when colleges, museums and observatories across the globe are striving to raise awareness about the wonders and potential dangers of asteroids. From online broadcasts and lectures to hands-on activities, a number of events are happening worldwide.

Here is just a sampling:

The first Asteroid Day kicked off in 2015, after astrophysicist Brian May, best known as a guitarist for the rock band Queen, introduced director Grigorij Richters to the B612 Foundation, a U.S.-based nonprofit advocacy agency with the goal of protecting Earth from asteroid impacts through early prevention. Apollo 9 astronaut Rusty Schweickart and Danica Remy — founder and chief operations officer of B612, respectively — joined May and Richters as co-founders of Asteroid Day. [Near-Earth Asteroids: Famous Space Rock Flybys and Close Calls (Infographic)]

"The more we learn about asteroid impacts, the clearer it became that the human race has been living on borrowed time," May noted on the official Asteroid Day website. "Asteroid Day would [be] the vehicle to garner public support to increase our knowledge of when asteroids might strike and how we can protect ourselves."

Every day, Earth is bombarded by tons of dust-size particles that burn up in the atmosphere. According to NASA, an automobile-size asteroid hits Earth's atmosphere about once a year, burning up before it reaches the ground. A larger object that would be capable of threatening the planet's civilizations collides with Earth once every few million years, the agency estimates.

To prepare for the risk of catastrophe, NASA has developed a Planetary Defense Coordination Office. Other space agencies have developed similar programs. On NASA's Planetary Defense FAQ, the agency writes that deflecting an asteroid would require changing its velocity by less than an inch per second years in advance of a potential collision. NASA is working to develop a so-called kinetic impactor, which would hit an asteroid slightly with an object to slow it, and a gravity tractor, which would put a large mass near an asteroid whose gravity would tug at it enough to change its path.

Both systems would require knowledge of an asteroid's deadly trajectory years in advance. "An asteroid on a trajectory to impact Earth could not be shot down in the last few minutes, or even hours, before impact," NASA officials wrote in the FAQ. "No known weapon system could stop the mass because of the velocity at which it travels — an average of 12 miles per second [19 kilometers per second]."

Because changing the course of a deadly asteroid requires advance notice, stopping a disastrous collision requires spotting the threat early on. International Asteroid Day was established to raise public awareness of the potential danger and how to avoid it.

Another way to prevent collisions is for scientists to gain a better understanding of the properties of asteroids and how they move. In 2016, NASA launched the Origins, Spectral Interpretation, Resource Identification, Security, Regolith Explorer (OSIRIS-REx) mission to the asteroid Bennu. Set to arrive in August 2018, the spacecraft will orbit the asteroid, studying it for two years before scooping up a sample of dust and pebbles that will return to Earth in 2023. While it will be NASA's first asteroid sampling mission, it won't be the world's first; Japan's Hayabusa mission returned an asteroid sample to Earth in 2010.

Together, these initiatives should help scientists and engineers prepare for potential dangers from asteroids. You can prepare by attending one of the many Asteroid Day events, found on the website here. But don't despair if you can't attend. The site will be broadcasting video clips, panels and even a movie all day today. And Space.com has a slideshow of asteroid movies you might enjoy.