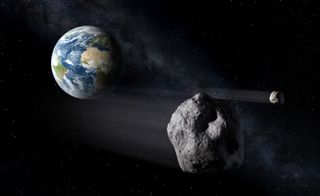 That's the main message of "Asteroid Day," an educational campaign that launched today (Dec. 3) at a joint news conference held both here at the California Academy of Sciences and in London. Asteroid Day aims to raise awareness of the threats posed by space rocks and eventually help boost the rate of near-Earth asteroid discovery by a factor of 100.

"We need all nations to cooperate," said astrophysicist Brian May, who is also a founding member and lead guitarist of the rock band Queen. "This is not just an American problem or a British problem; this is a world problem which is avertable. That's our message." [Potentially Dangerous Asteroids (Images)]

The campaign wants the world to mark Asteroid Day on June 30, 2015, the 107th anniversary of the "Tunguska event." On June 30, 1908, a near-Earth object (NEO) thought to be about 130 feet (40 meters) wide exploded above the Podkamennaya Tunguska River in Siberia, destroying 800 square miles (2,072  square kilometers) of forest.

"If that event had taken place 6 1/2 hours later, Berlin would have rotated into the object's path, and that would have utterly changed the course of human civilization," said Bill Nye, former TV "Science Guy" and CEO of the nonprofit Planetary Society, who joined today's news conference via videoconference from New York.

A series of events organized by individuals and groups around the world will take place on June 30 of next year to mark the anniversary, Asteroid Day organizers said.

Humanity has the know-how to prevent another Tunguska, researchers say: Threatening asteroids can be sped up or slowed down slightly, causing them to miss the planet.

The ideal deflection campaign would send one robotic "observer" probe out to rendezvous with the space rock and then a "kinetic impactor" craft to slam into the asteroid, said former Apollo astronaut Rusty Schweickart, co-founder and chair emeritus of the nonprofit B612 Foundation, a group dedicated to preventing catastrophic asteroid impacts. (The foundation is developing an asteroid-hunting space telescope called Sentinel, which may launch in 2018 or 2019.)

The observer spacecraft would confirm and note the effects of the deep-space collision and, if necessary, further change the asteroid's velocity by flying alongside it and exerting a tiny gravitational tug.

But this strategy can only work with a great deal of lead time — perhaps about 20 years ahead of the potential Earth impact, Schweickart said. Therefore, it's imperative to find hazardous objects early — another big message of the Asteroid Day campaign.

There's a lot of work to do on this front. NASA has found more than 95 percent of the really big NEOs out there — rocks at least 0.6 miles (1 km) wide, which could threaten human civilization if they hit Earth — and none of them poses a risk for the foreseeable future. But there are probably about 1 million NEOs comparable in size to the one that caused the Tunguska event, and less than 1 percent of them have been spotted, Schweickart said.

He and other Asteroid Day organizers hope the campaign results in more money being funneled into the detection effort, leading to the 100-fold increase in the asteroid discovery rate. Currently, governments around the world spend $40 million to $50 million per year toward this end, and scientists find about 1,000 NEOs annually, said B612 co-founder and CEO Ed Lu, a former NASA astronaut.

"Let's do 100 times better than we're doing now at finding these asteroids," Lu said. "That will give us a fighting chance. That will be what allows us to be smarter than the dinosaurs."

Scientists think the dinosaurs were wiped out when a 6-mile-wide (10 km) asteroid slammed into Earth 65 million years ago.

To learn more about Asteroid Day, go to www.asteroidday.org.