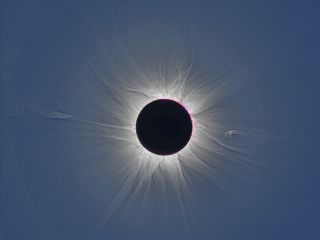 On Aug. 21, 2017, a total solar eclipse will cross the continental U.S. from Oregon to South Carolina. During this event, the moon will completely block out the face of the sun, creating one of the most awe-inspiring sights in nature. Jay and Naomi Pasachoffare both eclipse enthusiasts, having seen a combined total of 104 eclipses (including total, partial and annular eclipses). In this post, they reveal a brief history of significant solar eclipses that have occurred on Aug. 21.

While watching the penultimate episode of National Geographic Channel's "Genius," patterned after Walter Isaacson's excellent biography of Albert Einstein, we realized that the 1914 total solar eclipse occurred on Aug. 21, as will be the case for the total solar eclipse that will be visible in the continental U.S. later this summer.

Then, we realized that another important solar eclipse, that seen by 13-year-old Tycho Brahe in Denmark in 1560, also occurred on Aug. 21.  Though that eclipse was only partial in his area of the globe (meaning the moon covered only part of the sun's disk), young Tycho was inspired by the inaccuracy of the eclipse predictions at the time. He went on to make the most detailed pre-telescopic observations of the positions of stars and planets ever. (Tycho is best known for his high-quality observations of the positions of Mars that enabled Johannes Kepler to frame his three laws of planetary motion. Those laws now extend to the orbits of planets around other stars, many of which have been discovered by the eponymously and meaningfully named Kepler spacecraft.)

Looking for more eclipses that took place on Aug. 21, we did a search of the millennium from A.D.  1501 through 2500 on Fred Espenak's wonderful website, EclipseWise.com. An astrophysicist and eclipse expert, Espenak generated much of the information found on the official NASA eclipse website. He then migrated that work to his own site upon his retirement from the agency. In 2014, he published a "Thousand Year Canon of Solar Eclipses, 1501-2500"(Astropixels Publishing).

On the page describing the total solar eclipse of Aug. 21, 1560, we see that the path of totality (the region from which the total solar eclipse is visible) started in what is now eastern Canada, and then went through Portugal, Spain and Africa. At maximum, the moon covered about 60 percent of the sun's diameter as seen from Denmark, where Tycho was observing. Still, this partial eclipse had a major effect on the history of science, given its inspiration of the teenage Tycho, whose work led to Johannes Kepler's, which led to Isaac Newton's.

At this point, we must note that the Gregorian calendar came into use in what we now call Italy in 1582, so Tycho’s observations were made on Aug. 21 on the Julian calendar.  The difference between the Julian and Gregorian calendars proved significant in astronomical history when Simon Marius in Germany used a neighbor's telescope to spot satellites around Jupiter in late 1509, writing down his notes in late December, according to the Julian calendar. Meanwhile in Venice, Galileo Galilei was using the new Gregorian calendar and also spotted those satellites. He started writing down his notes on Jan. 7, 1610.  Which of the two men made the discovery first? Transforming Marius' date to the Gregorian calendar gave Jan. 8, 1610; Marius, therefore, independently discovered the moons of Jupiter one day after Galileo! (Who saw them first without taking notes is a different question.)  We now call those moons the Galilean satellites, though the names — Io, Europa, Ganymede and Callisto — were suggested for them by Marius in his 1614 book "Mundus Iovalis" ("World of Jupiter").

As far as eclipses that have occurred on Aug. 21 between 1560 and 1914, we found only an annular eclipse on Aug. 21, 1626 (an annular eclipse occurs when a thin ring of the sun's disk remains visible around the edge of the moon, because the moon is smaller in the sky than average), a hybrid annular-total eclipse on Aug. 21, 1645, a partial eclipse on Aug. 21, 1664, and no Aug. 21 eclipses in the 18th or 19th centuries. The 1626 eclipse's annularity was entirely over the Pacific Ocean, with partial phases covering North America and Central America, except for the extreme northeastern U.S., just too far south to have been seen by the Pilgrims. 1645's totality went from Greenland over to Siberia, with partial phases seen throughout Europe. 1664's partial eclipse was visible only from a bit of northeastern Siberia, extending up close to the North Pole.

In August 1914, Erwin Finlay-Freundlich (1885-1964), a young German astronomer, after consultation with Albert Einstein, undertook an expedition to the Crimean Peninsula of Russia to see if his photographs of an eclipse would show the slight deflection of starlight caused by the warping of space around the sun, predicted by the then-current version of Einstein's general theory of relativity. But war broke out when the scientific party of three scientists were in Russia, and they were interned because Germany had declared war on Russia, and apparently also because they had much  photographic equipment and were therefore suspected as spies.  (An American eclipse expedition in Russia at the time was not interned.)

In any case, in 1914 Einstein's theory was not complete; he later found a factor-of-two increase in his prediction. In other words, had Finlay-Freundlich's expedition made accurate measurements, they would have differed from Einstein's prediction by a factor of two. Then, when Einstein improved his theory — as he actually did for a 1916 publication — it would have been seen as a patch instead of a triumph. Thankfully for Einstein, the theory wasn't successfully put to the test until the total eclipse of 1919, in an experiment led by Arthur Eddington.

Another interesting point is that it was cloudy where the Germans would have been, so even if they had not been interned, the scientific observations would not have been successful. (The "Genius" television episode showed Finlay-Freundlich gazing at the eclipsed sun, with the corona surrounding the lunar silhouette, from his cell. That, along with the setting of the internment in the winter, with snow, is an inaccuracy in the TV show; the eclipse and the internment occurred in August.) The clouds also prevented the American expedition from observing the eclipse.

David Todd, a professor at Amherst College, also attempted to observe the eclipse from Europe, but he planned to do so from his "aeroplane," as the New York Times described the next day in reporting on the general cloudiness. (The newspaper was unaware of the internment of the German expedition.) Todd's own description, published months later, was that he was on the ground at the centerline south of Kiev, and that he could see part of the corona through clouds, "which at no instant permitted the corona to be seen entire." Those conditions would not have allowed enough stars to be seen to test relativity.

Then, only in 1933 did Aug. 21 again boast a solar eclipse: an annular eclipse extending from the Middle East through Pakistan, India, Malaysia and Indonesia, and winding up in northern Australia, near where we observed the 2012 total solar eclipse. Partial phases were visible throughout East Africa, central Europe, western Russia, China and southeast Asia, and throughout all but extreme eastern Australia.

Having a total solar eclipse cross the United States on Aug. 21, 2017, is leading to major efforts on a wide variety of observational fronts. To once again test Einstein's theory of relativity in the same way that Eddington did, careful measurements of the positions of the stars near the sun during totality are being made by astronomer and historian of science Bradley Schaefer of Louisiana State University and by retired physicist Don Bruns.  The new catalog of star positions from the European Space Agency's Gaia spacecraft may provide a means of calibrating the experiment, providing star position. Schaefer has concluded that Eddington had been lucky in his measurements, with several calibration factors canceling out, to give him the famous result that made Einstein famous worldwide among scientists and nonscientists alike.

What will be the most important result of this Aug. 21, 2017, total solar eclipse? We certainly hope to make major discoveries about the solar corona, given the quality and number of telescopes, cameras, spectrographs and other instruments we will be using to observe totality. Perhaps, as was the case for the 1560 eclipse, it will be the inspiration for some young student to go on to make a scientific breakthrough.

We hope the people in the future will look back with such pleasure on this year's Aug. 21 eclipse.  There will be a partial eclipse on Aug. 21, 2036, and then no Aug. 21 eclipse until annulars in 2305 and 2734.  Even worse, the total eclipse of Aug. 21, 2734, will be visible only from Antarctica — although maybe (though this is not a desired outcome) the ice there will have melted by then and access would be easier than it is in 2017.

Walter Isaacson, "Einstein: His Life and Universe" (Simon and Schuster, 2007)

Jay Pasachoff is the Field Memorial professor of astronomy at Williams College and a veteran of 65 solar eclipses. Naomi Pasachoff is a research associate at Williams College, an author and a veteran of 39 solar eclipses. Jay Pasachoff's research at the 2017 solar eclipse is sponsored in large part by grants from the Solar Terrestrial Program of Atmospheric and Geospace Sciences Division of the National Science Foundation, and the Committee for Research and Exploration of the National Geographic Society.