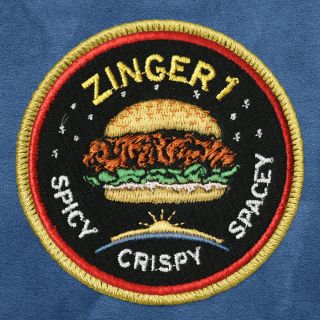 A mission patch designed by Kentucky Fried Chicken for a promotional campaign that will place a chicken sandwich on a high-altitude balloon.
(Image: © KFC/World View)

Updated 6/28: The World View KFC flight is now scheduled for Thursday, June 29. The launch window is scheduled to open at 8 a.m. EDT.

A high-altitude balloon flight that would have carried a chicken sandwich to the edge of space has been delayed again, due to wind conditions on the ground.

Today (June 22), World View Enterprises was scheduled to launch one of its Stratollite high-altitude balloon systems on a four-day test flight carrying a peculiar payload: chicken sandwich from Kentucky Fried Chicken (KFC). The launch was also delayed from its original launch date, June 21, because of weather conditions.

"Due to weather, we won't be launching the Zinger today," KFC wrote on Facebook. "But technically mankind has waited all of eternity to launch a chicken sandwich into space, so a little longer probably won’t hurt. Updated launch date to come."

World View tweeted that the delay came because of "increased ground wind conditions," and suggested the next launch will likely be Saturday.

During its four-day flight the balloon is expected to reach altitudes of up to 50,000 to 80,000 feet (18,300 to 22,900 meters). It will be the "longest controlled stratospheric balloon flight with a commercial payload in history and the first-ever multi-day mission of the World View Stratollite flight system," according to a statement from KFC.

The flight is part of an advertising campaign by KFC but serves as a real test flight for World View, which is aiming to use high-altitude balloon systems for applications including weather monitoring, Earth imaging and near-space tourism.