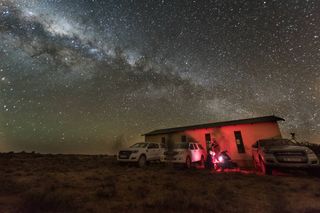 Paul Maley and Ted Blank, members of the International Occultation Timing Association, observed the occultation of Kuiper Belt object 2014 MU69 on the morning of June 3, 2017, from the Karoo desert near Vosburg, South Africa. Their target field was in the constellation of Sagittarius.
(Image: © Henry Throop/NASA/JHUAPL/SwRI)

The team behind the New Horizons space probe's historic close flyby of Pluto recently pulled off a challenging observation of the spacecraft's next target.

On the night of June 2, the mission scientists pointed dozens of ground-based telescopes toward an object called 2014 MU69, which lies about 1 billion miles (1.6 billion kilometers) beyond Pluto. The team was watching carefully as the object crossed in front of a distant star (an event known as an occultation), illuminating the region immediately around MU69 for just 2 seconds.

The New Horizons spacecraft is scheduled to fly by 2014 MU69 on Jan. 1, 2019, and taking observations during the occultation allowed the scientists to scan the area for hazards that could damage the spacecraft, according to a statement from NASA. The data could also give the scientists information about the object's size, reflectivity and other characteristics, NASA officials said. [Destination Pluto: NASA's New Horizons Mission in Pictures]

The feat was "the most technically challenging and complex stellar occultation observation campaign ever attempted," according to the NASA statement. The event was visible from a limited region on Earth that included Argentina, South Africa and a large swath of open ocean.

The New Horizons team was able to obtain observation time on more than two dozen fixed-based telescopes inside the occultation visibility path, but bad weather could have easily obscured the view from any of those locations. So the team also brought another 25 portable telescopes into the viewing area, according to an earlier statement. The telescopes were separated by anywhere from 6 to 18 miles (10 to 29 km) to increase the odds that at least a few of them would capture quality data. But in the end, all 54 telescope teams reported collecting data, according to NASA.

"A tremendous amount had to go right to correctly execute such a massive observation campaign, but it did," said New Horizons principal investigator Alan Stern, of the Southwest Research Institute in Boulder, Colorado. "The main goal of these observations was to search for hazards; the secondary objective was to try to glimpse the occultation of MU69 itself, in order to learn its precise size. Scouring all the dozens of datasets for these two objectives is going to take us a few weeks."

Scientists discovered MU69 in 2014, but much about it remains unknown, including its specific orbit, according to the statement. The researchers are using data from the Hubble Space Telescope and the European Space Agency's Gaia mission to try to pin down the path of this space rock, and with data from those two missions, the scientists were able to predict when and where the June 2 occultation would be visible.

For the July 10 occultation, the team will utilize the Stratospheric Observatory for Infrared Astronomy (SOFIA), a joint project between NASA and the German Aerospace Center that consists of observation equipment mounted on a high-altitude airplane. SOFIA can observe occultation events while flying over the open ocean and goes above clouds that would obscure the view from the ground. SOFIA has also been used to observe Pluto's occultations of background stars.

For the July 17 occultation, the New Horizons team will once again rely on mobile, ground-based telescopes positioned in the Patagonia region of Argentina. On that day, MU69 will eclipse a particularly bright star, which should allow the researchers to see even more potential debris in the area around the object.