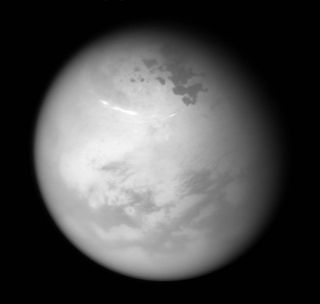 The image is a summer postcard: Cassini took it on June 9, a little over two weeks after northern summer arrived in the Saturn system. The dark seas visible in the newly released photo lie near Titan's north pole and were shrouded in darkness for part of Cassini's mission. (It takes Saturn 29.5 Earth years to orbit the sun, so seasons on the ringed planet, and on Titan, last nearly 7.5 years.)

Cassini was about 315,000 miles (507,000 kilometers) from Titan when it snapped the picture, NASA officials said. [Check out more awesome Cassini photos of Titan]

At 3,200 miles wide (5,150 km), Titan is the second-largest moon in the solar system, behind the Jovian satellite Ganymede. Titan has a thick, nitrogen-dominated atmosphere and a hydrocarbon-based weather system: Liquid ethane and methane rain from the skies, flow in rivers and collect in seas and large lakes.

Indeed, Titan is the only object in the solar system besides Earth known to host stable bodies of liquid on its surface.

The $3.2 billion Cassini-Huygens mission — a joint effort of NASA, the European Space Agency and the Italian Space Agency — launched in 1997 and arrived in the Saturn system in 2004.

The Cassini mothership carried a piggyback lander called Huygens, which successfully touched down on Titan in January 2005. The orbiter, meanwhile, continued circling Saturn, studying the giant planet, its iconic rings and many moons.

But that work is nearly done. In April, Cassini made the first of 22 "Grand Finale" dives between Saturn's cloud tops and its innermost ring. These plunges will continue for several more months; then, on Sept. 15, the spacecraft will barrel into Saturn in an intentional death dive.

This maneuver is designed to ensure that Cassini doesn't contaminate Titan or fellow Saturn moon Enceladus — both of which might be capable of supporting life — with microbes from Earth, NASA officials have said.