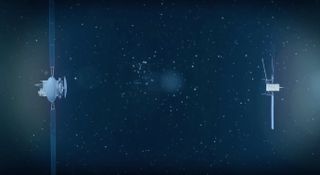 Just three years from now, a fleet of small robotic spacecraft could be cruising the space around Earth repairing and moving satellites, under the plans of a United Kingdom-based startup.

"We want to start with extending the life of satellites in the geostationary orbit," Campbell said, referring to the perch about 22,250 miles (35,780 kilometers) up where orbital velocity matches Earth's rotational velocity. At this point, spacecraft can hover over the same spot. "There are 450 such satellites, most of them commercial, and they are all designed for 15 years of service."

Geostationary satellites are pushed into a "graveyard orbit" at the ends of their lives using their last drops of fuel so they don't block the geostationary ring once they become inoperable. Campbell said fuel is the main limitation, and the satellites could easily serve much longer if it were possible to extend their life by station-keeping them (that is, maintaining them in their proper orbits).

"Most of the spacecraft systems are perfectly fine," he said. "It's simply a waste of resources to just get rid of them."

Effective Space Solutions foresees its space drones launching to geostationary transfer orbit as secondary payloads. The craft would then use their ion thrusters to lift them up to geostationary orbit.

Once there, the craft would cruise from one satellite to another providing station-keeping, relocation or deorbiting services. The spacecraft could also correct positions of satellites accidentally injected into incorrect orbits as a result of a launch anomaly. Such cases are not rare. In 2014, for example, two European Galileo navigational satellites ended up in useless orbits after the failure of a Russian Soyuz rocket. Spacecraft controllers spent months correcting the situation, and the operation cost huge amounts of precious fuel.

"We have a patent-pending nonintrusive docking mechanism, which allows us to dock to existing satellites that were not designed to be docked to," Campbell said. "We can have multiple docking and undocking sessions. We can move from one customer to another, extend the life for some years and then hop to the other mission."

Campbell said that most of the servicing craft's subsystems and algorithms are commercially available "heritage systems," which cuts the cost of the technology significantly.

"The replacement satellite cost for an operator is something that we need to tackle," said Campbell. "We need to come up with a proposition that will dramatically change the decision-making of the operator."

Effective Space Solutions isn't limiting its thinking to geostationary orbit. In the 2020s, thousands of satellites are slated to launch to low- and medium-Earth orbits, to fill out currently planned telecommunications mega-constellations.

Due to the extremely large number of satellites, there is a high probability of failures. Space debris experts warn that this could lead to a sharp increase in the number of uncontrollable "zombie" satellites that could jeopardize other spacecraft. Campbell said servicing spacecraft could be the missing piece that allows the world to sustainably enjoy the benefits of mega-constellations.

"Somebody would have to take care of deorbiting such zombies," said Campbell. "We can also reduce the cost of such constellations' deployment. We can be the backup when the satellite fails so that the constellations can reduce their redundancy."

Effective Space Solutions isn't the only entity working on satellite-servicing craft. For example, NASA has tried out such technology on the International Space Station and aims to launch a test mission in 2020 that will refuel the Landsat-7 satellite. And the U.S. Defense Advanced Research Projects Agency said it hopes to loft its own servicing vehicle a year later.

Editor's Note: This story has been updated. An earlier version incorrectly stated that Effective Space Solutions' servicing craft will refuel satellites. The servicer will help repair and move target satellites, but it won't refuel them.