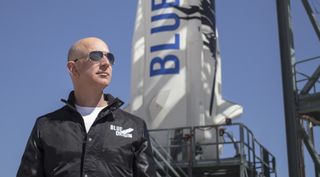 In a tweet this morning, Blue Origin Founder Jeff Bezos said OneWeb has reserved five launches using the rocket, bringing to six the number of missions in the New Glenn manifest.

Bezos announced Eutelsat as New Glenn's first taker March 7 during a joint appearance with Eutelsat CEO Rodolphe Belmer at the Satellite 2017 conference here. Before inviting Belmer up to the stage, Bezos revealed new details about the reusable rocket. New Glenn's two-stage version is being designed to carry up to 13 metric tons to geostationary transfer orbit, or 45 metric tons into low Earth orbit. Blue Origin anticipates first launch in 2020.

"It is something that came up as a supplement to what we have in place with Arianespace with Soyuz and with Virgin Galactic," he said. "The core of the network will be launched on Soyuz rockets, but we needed some alternatives and we want to keep driving the industry to provide more choices on the launch side with more cost-effective solutions. I think it's important for all of us to have these, so we are excited about where Blue Origin is headed."

Sprague said OneWeb wants to have several launch options in the market for the 882 satellites the form "gen-one" of the OneWeb constellation, as well as the gen-two constellation that could grow by another 2,000 satellites.

In an interview following the panel, Sprague said he isn't sure how many satellites would launch per mission, as it depends on whether New Glenn is used for the first- or second-generation of satellites. OneWeb has previously stated that the mass of the first-generation satellites would be 150 kilograms, but the specifications of the second generation have yet to be decided.

OneWeb has 21 Soyuz launches booked with Arianespace, plus options for five additional Soyuz and three of the future Ariane 6 rocket. With Virgin Galactic, OneWeb has 39 missions with LauncherOne, the company's air-launched vehicle that uses a modified Boeing 747 jetliner. OneWeb Satellites, the joint venture between OneWeb and Airbus Defence and Space, is currently contracted to build 900 satellites total.