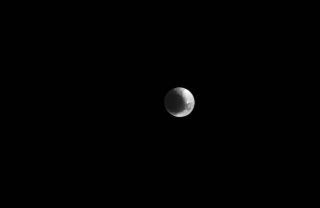 Saturn's unusual moon Iapetus, as captured by the Cassini spacecraft March 11. Features in the image are visible at a scale of about 9 miles (15 kilometers) per pixel.
(Image: © NASA/JPL-Caltech/Space Science Institute)

Iapetus, a Saturn moon with jumbled colors, shows its strange surface shapes in a new view from the Cassini mission, which is currently exploring the gas giant.

The picture shows Cassini Regio, a dark, dusty region on the moon that is somewhat longer than the state of California. A much brighter area surrounds Cassini Regio, which gives Iapetus a two-tone face.

The spacecraft, which is a collaboration between NASA, the European Space Agency and the Italian Space Agency, took the image in visible light on March 11 from a distance of about 1.6 million miles (2.6 million kilometers), NASA officials said in a statement. Features in the image are visible at a scale of about 9 miles (15 kilometers) per pixel.

Cassini is in its last half-year of operations before taking a deliberate suicidal plunge into Saturn in September. The spacecraft has been at the ringed planet since 2004 and is now low on fuel, completing data collection while diving 22 times between Saturn's rings and the planet itself.