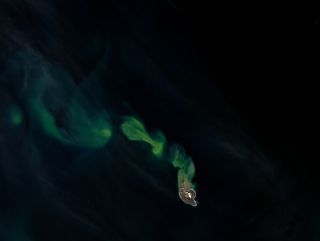 A true-color image taken by an instrument aboard the Landsat-8 satellite shows a plume of sediment and a puff of steam coming from the Bogoslof Volcano in Alaska.
(Image: © NASA Earth Observatory Image by Joshua Stevens)

A plume of ash and sediment turns the Bering Sea an eerie shade of green in a new image of an erupting Alaskan volcano.

The snapshot was taken by the Operational Land Imager on the Landsat-8 satellite on June 5, as Bogoslof Volcano in the Aleutian Islands belched steam. The volcano has been erupting since December 2016, according to NASA Earth Observatory, which released the image.

Bogoslof Island is a tiny protuberance in the Bering Sea. According to the Alaska Volcano Observatory, it rises about 300 feet (100 meters) above sea level. The rest of the volcano's bulk — 6,000 feet (1,800 m) of elevation — is hidden beneath the surface of the sea. The portions of Bogoslof that are visible are ever-changing as eruptions reshape the volcano. In 1992, for example, a new chunk of land just 500 feet by 900 feet (150 m by 275 m) popped up on the north end of the island. [Images: New Volcanoes Discovered in Alaska]

Bogoslof is currently at an "orange" level of alert for aviation, according to the Alaska Volcano Observatory. That means the volcano is active, with small explosions and ejections of ash and steam. On June 5, when Landsat 8 swooped over the volcano, it had recently shot volcanic ash 20,000 feet (6,096 m) into the air. Later that day, the volcano steamed and let out a seismic shiver. A small puff of steam can be seen in the Landsat-8 image, which was taken at 2 p.m. local time.

These rumblings were nothing compared to the volcano's unrest on May 28, when the aviation color code shot up to red. During a 50-minute eruption, Bogoslof emitted a cloud of ash that reached between 35,000 feet and 45,000 feet (nearly 11,000 m to 14,000 m), cruising altitude for passenger planes.

The Aleutian arc stretches like a tail from the Alaskan mainland toward the Kamchatka peninsula of Russia. According to the Smithsonian Institution's Global Volcanism Project, Alaska has produced nearly 70 percent of all historical eruptions in the United States, with the vast majority of those happening in the Aleutians. The state of Alaska is home to 42 of the 65 historically active volcanoes in the United States, according to Smithsonian.

The Aleutians are largely unpopulated, so eruptions on the island chain rarely affect people on the ground. Ash spewed from the volcanoes can impact airline traffic, though. Currently, the Alaska Volcano Observatory is monitoring three restless volcanoes in the state, including Bogoslof. Both are on the Aleutian island arc. One, Mount Cleveland, is displaying elevated surface temperatures as measured by satellite and has prompted an aviation warning level of orange. The other, Mount Pavlof, is exhibiting unrest at slightly lower levels, with increased seismic activity, suggesting that eruptions could be imminent.