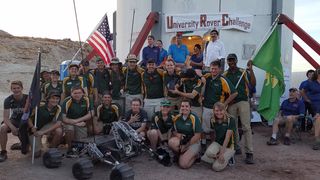 Students from the Missouri University of Science and Technology won the 2017 University Rover Challenge.
(Image: © The Mars Society)

Kevin Sloan is director of the University Rover Challenge for The Mars Society, a nonprofit organization that advocates for the human exploration and settlement of the Red Planet. He contributed this article to Space.com's Expert Voices.

After three days of intense competition under the hot desert sun, the Mars Rover Design Team (MRDT) from the Missouri University of Science and Technology became the first team from the United States to win the University Rover Challenge (URC) since 2010. Thirty-five rovers and more than 500 students from seven countries descended upon the Mars Desert Research Station (MDRS) in southern Utah from June 1 to June 3 for this annual competition, which asks college students to design and build the world’s best Mars rover.

Poland was represented on the podium for the fifth consecutive year, as the PCz Rover Team from the Częstochowa University of Technology won second place. Brigham Young University from the United States earned the third position, marking the sixth time BYU has won a place on the podium. [Mars Explored: Landers and Rovers Since 1971 (Infographic)]

The international robotics competition for college students, which is part of the Mars Society’s Rover Challenge Series, featured an elite field of teams vying to build the world’s best student-designed Mars rover. A record 82 teams from 13 countries took part in URC2017. Following a rigorous two-stage down-selection process, 36 teams were invited to the field competition at MDRS. Thirty-five teams from seven countries arrived with their rovers, ready for the exciting challenges in the Utah desert.

For its 11th year, URC introduced two new tasks: the Extreme Retrieval and Delivery Task, designed to support astronauts by delivering a variety of items across aggressive terrain; and the Autonomous Traversal Task. This was the first time that a fully autonomous capability has been required at URC. MRDT, in a display of exceptional engineering and execution, earned perfect scores in each event.

During the Autonomous Traversal Task, the MRDT rover, named Gryphon by its builders, demonstrated a remarkable set of subsystems that enabled it to autonomously navigate between a series of defined gates. While Gryphon’s navigation system enabled it to reach the vicinity of each gate, a visual tracking system located the gate markers, allowing it to stop inside the required 3-meter (10 feet) radius.

Between gates, while operating autonomously, Gryphon’s suspension systems and innovative carbon-fiber-based wheels displayed tremendous agility as they overcame dangerous and rocky terrain that threatened to flip most other competitors. Gryphon’s suspension, named Mantis, is a variation on the classical rocker-bogie suspension seen on typical NASA Mars rovers. The Mantis suspension was specifically designed for the rigors of URC, which include large obstacles and high-speed impacts as rovers race to complete tasks in a harsh environment.

Judges watching Gryphon complete the Autonomous Traversal Task were amazed at the ease with which MRDT tackled a task believed to be unbeatable in its first year at URC. Only two other teams were able to successfully reach the fifth gate, leaving the two most difficult gates for MRDT alone.

Other tasks included an Equipment Servicing Task, in which teams were required to perform maintenance on notional field equipment that involved fine motor skills; and a Science Cache Task, in which teams were required to search for signs of life using a method that is applicable to Mars exploration. The latter event is particularly unique, in that teams of engineers work with their scientist counterparts to understand the requirements of field science.

More than 1,000 students were involved in URC projects at their local universities during the 2016-2017 academic year. The rovers they built reflected the dedication, passion and ingenuity of the student teams — a point that was not lost on the judges and industry representatives attending the event.

The scores for all teams can be found at http://urc.marssociety.org/home/about-urc/urc2017-scores.