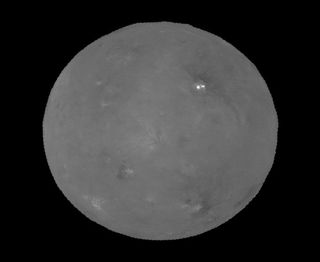 NASA's Dawn spacecraft captured this view of Ceres "at opposition" on April 29, 2017, taking images from a position exactly between the sun and the dwarf planet. The bright spots at center right are deposits within Ceres’ Occator Crater.
(Image: © NASA/JPL-Caltech/UCLA/MPS/DLR/IDA)

The dwarf planet Ceres shines and spins in a new video from NASA's Dawn spacecraft.

Ceres appears especially bright because Dawn captured the imagery while the dwarf planet was at "opposition" — that is, when the spacecraft was directly between Ceres and the sun.

"Based on data from ground-based telescopes and spacecraft that previously viewed planetary bodies at opposition, scientists correctly predicted that Ceres would appear brighter from this opposition configuration," NASA officials wrote in a description of the new video, which was released Tuesday (May 16). [More NASA photos of the dwarf planet Ceres]

"This increase in brightness, or 'surge,' relates the size of the grains of material on the surface, as well as the porosity of those materials," they added.

Dawn took the photos that make up the video on April 29, from a distance of about 12,000 miles (19,300 kilometers). Mission team members shifted the spacecraft into a special orbit to view the 56-mile-wide (90 km) Occator Crater from this opposition perspective, NASA officials said.

Occator stands out clearly in the video: It harbors the brightest of Ceres' mysterious bright spots, which scientists think reveal the presence of some type of salt on the body's surface.

The $467 million Dawn mission launched in September 2007 to study Vesta and Ceres, the two largest objects in the main asteroid belt between Mars and Jupiter. Dawn circled Vesta from July 2011 through September 2012 and reached Ceres in March 2015. In the process, it became the first spacecraft ever to orbit two different bodies beyond the Earth-moon system.

"Dawn's observations of Ceres during its more than two years there cover a broader range of illumination angles than almost any body in the solar system," NASA officials wrote in the same statement. "This provides scientists with an opportunity to gain new insights into the surface properties. They are currently analyzing the new data."

Last month, Dawn lost the third of its four orientation-maintaining reaction wheels. But the failure has not unduly affected the probe or its mission, NASA officials said; Dawn's handlers are used to orienting the spacecraft with its hydrazine thrusters and will continue to do so into the future.