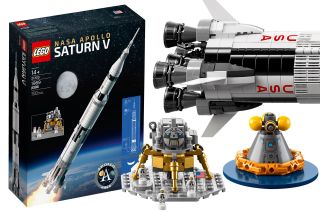 The countdown is on for the launch of the Lego Saturn V moon rocket.

Lego on Friday (April 28) rolled out its first photos and filed its "launch plan" for its "NASA Apollo Saturn V" set to be released on June 1. The towering model — the toy brick rocket when fully assembled will stand more than 3 feet tall (39.37 inches or 100 centimeters) or about 1:110 the size of the mighty booster — is based on a fan submission on the crowdsourcing website Lego Ideas.

The $119.99 set includes 1,969 pieces, providing a nod to the year that the Apollo 11 mission landed Neil Armstrong and Buzz Aldrin to become the first astronauts to walk on the moon on July 20, 1969. [NASA's Mighty Saturn V Moon Rocket Explained (Infographic)]

"The set also includes three stands to display the [rocket] model horizontally, three new-for-June-2017 astronaut microfigures for role-play recreations of the moon landings, plus a booklet about the manned Apollo missions and the fan designers of this educational and inspirational Lego Ideas set," the company stated.

Felix Stiessen and Valerie Roche (saabfan and whatsuptoday on the Lego Ideas website) first proposed their Saturn V in 2014. The project received its 10,000th vote on the crowdsourcing platform in November 2015, qualifying for it for a review by Lego's professional design team.

Their set was given the "go" to launch as an official product seven months later.

The final design of Lego's Saturn V differs in some ways from what Stiessen and Roche first submitted, omitting some of their ideas for details inside the rocket, but retaining the ability for those who build the model to recreate each phase of the Apollo lunar missions. Of note, the lunar module can be stowed inside the rocket's S-IVB third stage and then later "landed" on an included moon surface.

Similarly, a blue ocean surface is provided to display the command module (crew capsule) after splashdown, with its righting spheres deployed.

The spacesuited microfigures — tiny, less-articulated, peg-like versions of Lego's minifigures — are not only to scale with the lunar lander, but also to the Saturn V, such that they provide a real sense of the immense size of the 363-foot (110 m) launch vehicle. The set includes three microfigures, representing the three-person Apollo crew.

Recommended for Lego fans 14 years of age or older, the NASA Apollo Saturn V set will go on sale just five months before the 50th anniversary of the first Saturn V launch in November 1967. The Apollo 4 mission did not fly astronauts, but it did offer the first "all-up" test flight for the rocket.

The first crewed launch, Apollo 8 in December 1968, sent the first astronauts to orbit the moon. In total, NASA launched 13 Saturn V rockets between 1967 and 1973. Six missions landed men on the moon and one deployed the United States' first space station, Skylab.

The NASA Apollo Saturn V is the second Lego set to offer a version of the iconic moon rocket. The first, the "Saturn V Moon Mission," was released in 2003 as part of a series of space-themed models co-branded with the Discovery Channel. The 178-piece set included the booster, a lunar module, Apollo command module and moon rover.

The new Saturn V set is the third out of four space exploration-themed projects to be chosen from the Lego Ideas website for production to date. Lego previously sold sets based on Daisuke Okubo's model of Japan's Hayabusa asteroid probe and Stephen Pakbaz's replica of NASA's Curiosity Mars Rover in 2012 and 2014, respectively. The fourth, Maia Weinstock's "Women of NASA" minifigure collection, is expected for release by the end of the year or in early 2018.